We’re all searching for who we are. We rely upon Google as an oracle to give us meaning and occasional ‘answers’. With a world of potential at our fingertips, we’re still feeling lost. Artists usually practice the meditative concept of setting an intention through their researching and questions that drive their studio practice. In the late stages of capitalism, this is the important place to find meaning. In whatever way you choose to create, intention creates one’s emotional reality, and it is the filter for emotional subjectivity. Three recent Kansas City exhibitions looked at this intention setting practice with focus: Judith Levy’s WE ALL COME FROM SOMETHING, Ryan Wilks, Ari Fish, Tim J. Harte and Sean Prudden’s Here Where You Wish, and Drawing Machine: Future TOTAL by FUTURE TOTAL GROUP.

Judith G. Levy’s WE ALL COME FROM SOMETHING at the UMKC Gallery of Art. Image by E.G. Schempf, courtesy of the artist.

WE ALL COME FROM SOMETHING at the UMKC Gallery of Art (March 8 – April 6, 2018) opened up both the door to our collective memory and showcased the psychological queer interior of artist, Judith G. Levy. This show in and of itself, looks at how Levy’s work as a whole analyzes our relationship to definitions and declarations. We are all made up of fragments of our subjective experiences. What does it mean to have a simple white picket sign sum up your perceived identity? In aptly titled Memory Cloud #3, tiny little looking glasses hung scattered throughout the front gallery. The piece features found family photographs that can only be viewed individually, which is more time consuming, rather than as a grouping, where they are seen more quickly, with the possibility of some being overlooked entirely.

This body of work is slower and more contemplative for Levy, who works predominantly in parody and fiction that comment on our relationship to fact and fabrication within history. Often her work is very literal or tounge-in-cheek. However, in WE ALL COME FROM SOMETHING Levy is getting at a more important revelation. We explore our personal interiors through the lenses of popular culture, film, and advertising. The World Outside and the Pictures in my Head work in tandem like a silent film, reflecting that space for one to step into. Judith’s video work and stills of the same title showcase black and white clips of old 1940’s noir films, but are clearly places for projection. In Kissed by Elizabeth Taylor, the video performance nearby, there is a story of desiring to become Elvis and a longing to perform a kiss. It was clear, growing up through the rise of mass media, and in a time where queerness wasn’t encouraged, that television became a place of projection for exploring queer identity. This separation from needing our external manifestation to be the dominant way of defining the self is crucial for exploring the fragments of our intentions. 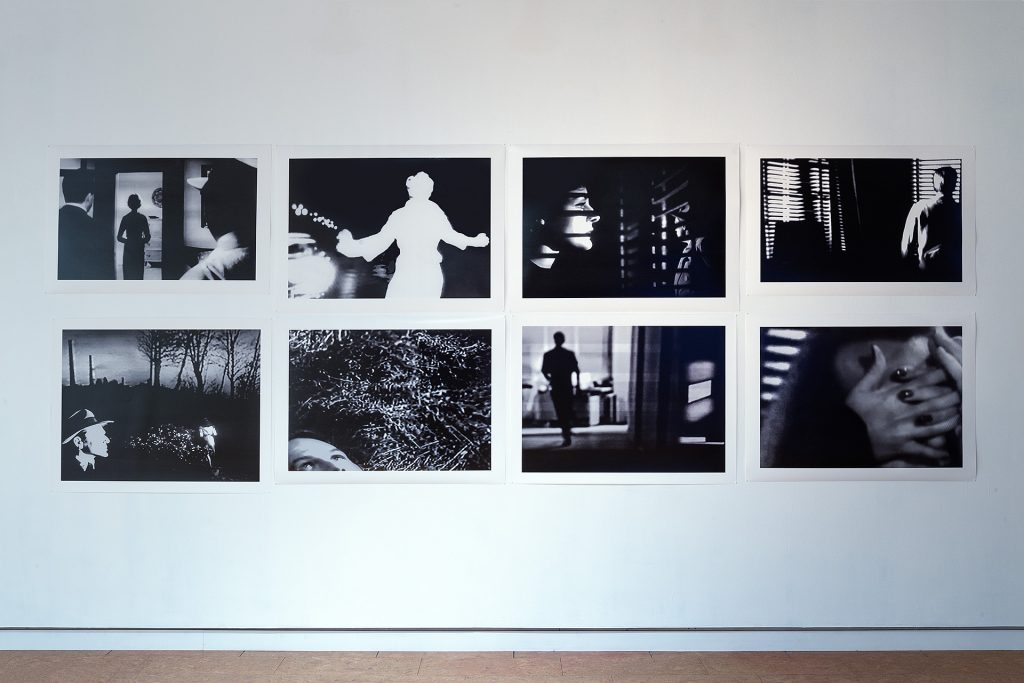 The World Outside and the Pictures in my Head by Judith G. Levy. Installation image by E.G. Schempf, courtesy of the artist.

Opening the night WE ALL COME FROM SOMETHING closed, was Here Where You Wish (April 6 – June 17th, 2018). This exhibition featuring Ryan Wilks, Ari Fish, Tim J. Harte and Sean Prudden, created a community altar for sharing intentions. Wilks had dipped found items associated with more occult-aligned practices such as, feathers, crystals and other talismans in gold leaf which was displayed like a cloud above the community altar. This participatory project, presented in the Downtown Kansas City Public Library, is open to public potential. The installation allows for visitors to give wishes, intentions, special objects, and create magic through manifestation. Fish transformed the space itself through shape, paint, and translucent panels that called to a secretive, sacred geometry. Normally, Wilks’ style of altar work is very Baroque-exxxtra-femme, but when paired with these future-modern symbols of Fish, it allowed for the focus to highlight these artists’ desire to foster a secular magic sacred space for slowing down and contemplation. As we approach later capitalism, far fewer folks are practicing any form of mindfulness, prayer, or slowing of any kind; rapid pace and burnout are rampant.  This exhibition offers a space within a library, a sacred home for so much knowledge and history, an opportunity to slow down, think, and honor the inner self.

Here Where You Wish at the Downtown Kansas City Public Library. Image Courtesy of Ryan Wilks.

Finally, reaching our relationship with intention and the ego, across town in the Crossroads Bauer space, Drawing Machine: Future TOTAL by FUTURE TOTAL GROUP removed the consciousness from self-making. The collaborators, Jacob Joslyn and Jacob Canyon, branded the project as a crowd-sourced ontological experiment. After answering a series of eight personality test questions on a small touch screen computer, I was given a personalized print out. The image was oddly familiar to me, visually it looked like my own drawing style, methodical hatching, mired with glitches of the hand. This result had a meaning that revealed something about who I might be. While this show seemed really similar to The Shape of Things at Front/Space last year, there was something just a little different. The work was a strange hybrid between a tarot reading and taking the Myers-Briggs. Each of these images had an essentialist ideology on what we should consider and how we should live our lives. My image represented the following statement:  “A pattern heavy in rest will lead to atrophy, while a pattern heavy in doing will lead to burnout,” and encouraged me to “think on periodicity”. This result cultivated a feeling of belonging and understanding through its result. Knowing there are others out there with a similar sentiment and worldview, also stirring up a mirror of emotions within myself at recognizing this truth, revealed through only a simple set of questions and image bank selections.

In this time, we follow all of these spaces of magic, whether it is our own intentions, wishes we set, a connection to a screen space full of potential for a personal history or recall, or a simple personality quiz that reveals a little more about who we might really be. Late Capitalism is forcing us all to look further within; what are the modes of living that drive us, what is emotionally and ontologically sustainable? To be an artist or a maker of any kind now, we are refusing to be traditional cogs in the machine. We are refusing to let go of our intuition. The power we all have to eventually break through creates a system that sustains and nourishes our ability to live freely