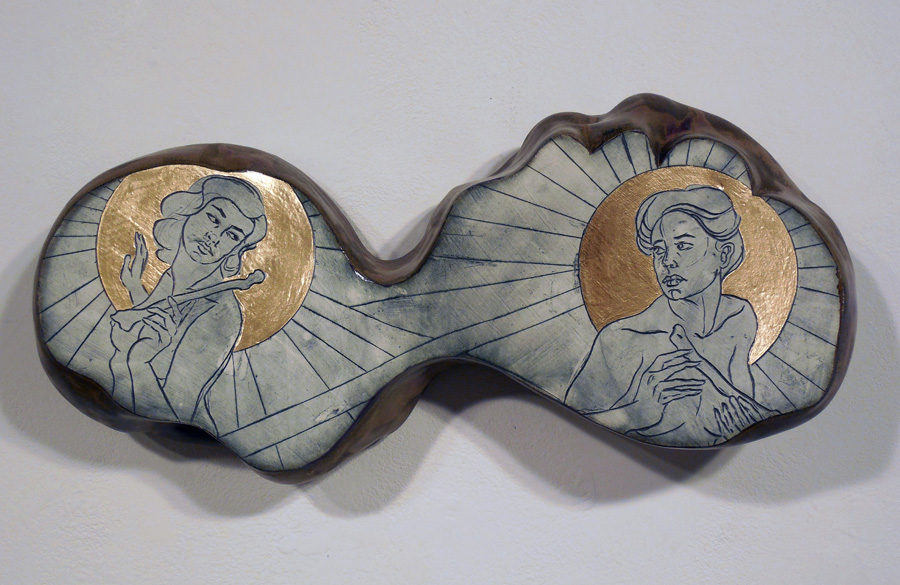 Kimberly LaVonne’s conversation with Gisela Morales centers around the metaphysical history and presumptions placed on the bodies of women and considered through clay. 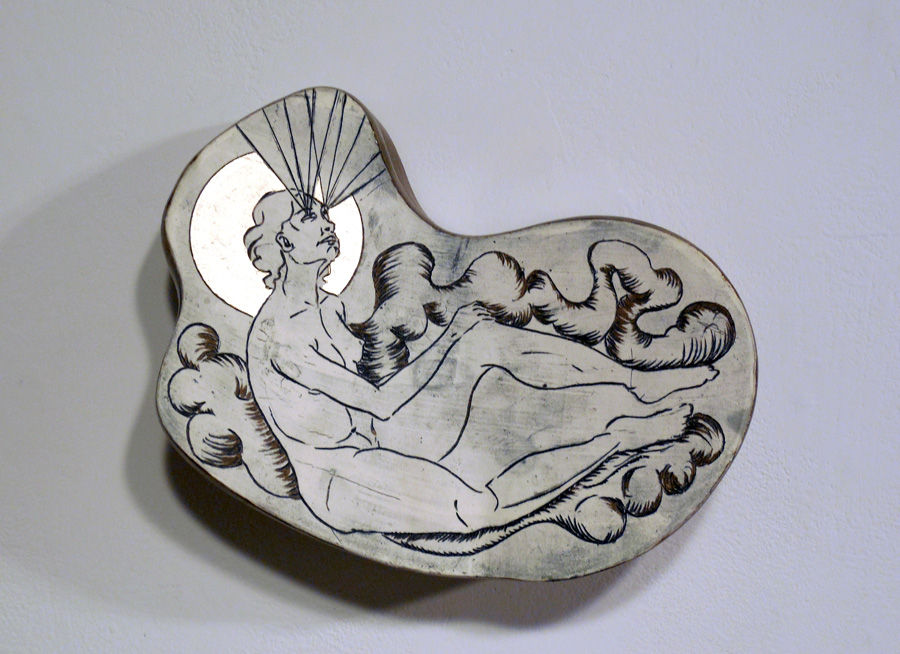 Kimberly LaVonne’s work is an examination of the unseen body through ceramic object. Employing organic bodies both in concept and medium produces work with flesh and organ-like qualities punctuated with Illustrations of saint-like female figures, which denote a need for self discovery and introspection. Fluctuating as specimens and relics, her sculptures deconstruct the human form into physical parts of divine abstraction, revealing what is not real into distorted and faintly familiar anatomy. In so doing, LaVonne awakens a new sense of wonder surrounding the investigation of the body. One that acknowledges the human body’s tension between scientific endeavor and religious belief, and underscores the use of women in building western anatomical knowledge. 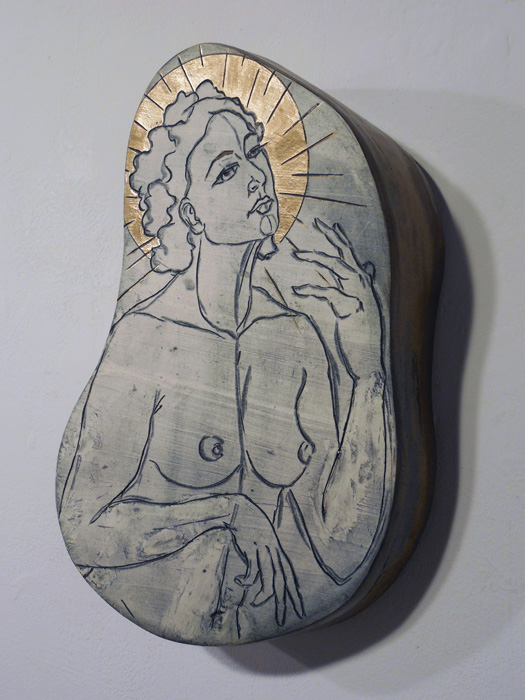 Kimberly LaVonne Sadness Is A Blessing, 2017

Motivated by the dichotomies present in the study of the body, LaVonne combines forms and shapes culled from anatomy books, medical collections, and gothic curiosities with illustrated references to the narratives of saints and holy women whose internal organs were mythologized as religious relics. Knowledge of the organs and their functions has been driven by myth, wonder, taboo and stigma. Human dissection throughout much of western history was considered sacrosanct. In this way, LaVonne is drawing a direct lineage to modern science and the taboos that placed limits on it. Human dissection was normalized as medical and scientific inquiry by the Greeks in the third century but then saw its decline with the introduction of Christianity. The advent of Roman law prohibited the dissection and autopsy of the human body in much of Europe. Instead, Christian culture, predominantly in its Catholic strain, has consolidated its anatomical understanding around the cult of saints. In their bodies, saints are thought to be present even after death,, making their corpses a source of protection and magical power. This created a fascination with saint relics and funerary practices involving the body’s  mutilation and disembowelment. It was not until the 14th century that the study of dissection remerged as a valid pursuit. This is the moment in history from which LaVonne’s iconography emerges. Much like the earliest folios of Fasciculus medicine or da Vinci’s studies on the human form, there is something inherently romantic in they way she molds form with illustration. Using a high fire clay body, her work yields rich terracotta forms that transform this history and iconography into intriguing tactile objects, resulting in a collection of fragmented parts made whole by the female bodies they represent.

LaVonne’s sculptures appear as perfectly sliced specimens whose flat surfaces provide the canvas on which organ forms are personified by women. The illustrated figures illuminate how the objectification of women has been a conduit to systems of knowledge regarding human physiology. During the time period LaVonne references, european women, and holy women in particular, appeared not as agents of knowledge, but rather as the objects of knowledge itself. This dispossession of knowledge has created persisting power structures in which women are relegated to role of vessels and unwitting participants. By working in ceramics, the vessel of the work itself is a metaphor for this societal predisposition While male bodies have become proxies for universality, the sole significance of female bodies has traditionally resided in the uterus. In the service men’s need to uncover the mystery of human generation, the uterus became the prefered object of Medieval dissection. As a result, internal anatomy became intrinsic to the the female body. Female corporal obsession combined with religious belief collided in the bodies of holy women. Accounts of holy women’s hearts being mummified, framed, and transformed into relics are the type of curiosities permeating through LaVonne’s imagination. Within this context, LaVonne’s figures express a certain level of self awareness, At times the physiological expressions are serene, self empowered and inviting, while at others they appear introspective, uneasy and distressed. The juxtaposition of these images onto three dimensional objects provides a holistic point of view into the forces that continue to shape self perceptions of the body that oscillate between the physical, functional, abstract, and spiritual.

Kimberly LaVonne
We Together Make A Limb, 2017