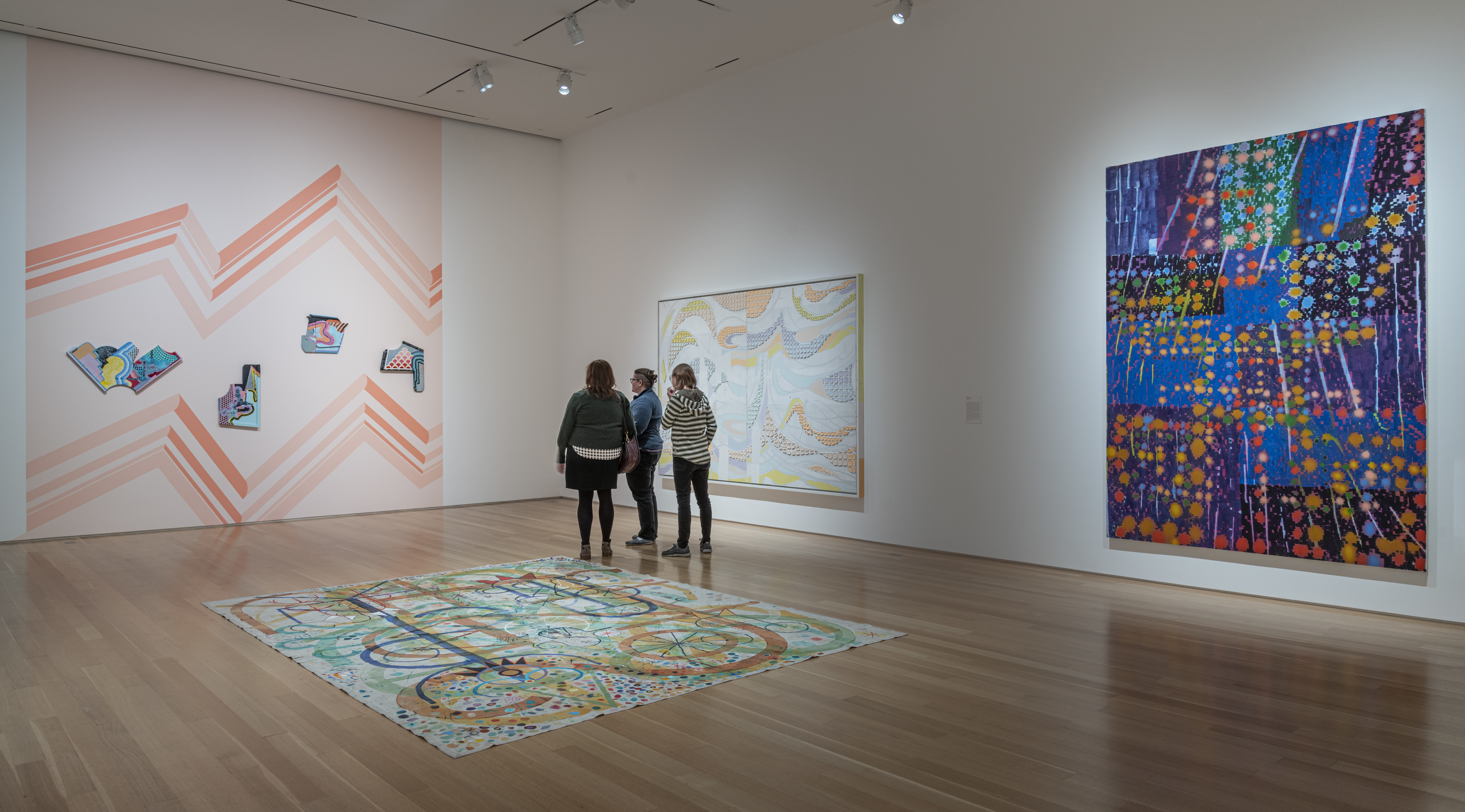 To Each Their Own: A Look at Survey Shows Through the Lens of queer abstraction

queer abstraction at the Nerman Museum of Contemporary Art in Overland Park, Kansas is a traveling survey show of queer artists. The complicated nature of doing a show about marginalized identities of any kind is that it inevitably brings societal wounds up to the surface, which are often fresh and ongoing. On the one hand, it’s essential to have the public or mainstream culture aware of these issues. The paradox is that once it’s in their hands, it’s almost impossible to control what happens next. That’s why the act of coming out remains such a terrifying proposition because no matter what one does to be courageous, the uncertainty of what could follow is palpable.

On face value, this exhibition is fascinating. Great work by talented artists exploring abstraction as a means for their particular histories and relationships to queerness. Some work (which appears above, in order from left to right), like Prem Sahib’s Outer Wear and Tom Burr’s Deep Purple, queers the context of existing white heterosexual male artistic monoliths Robert Morris and Richard Serra, respectively. While others, such as Math Bass’s Newz! and Elijah Burgher’s New Horny Sun Vision takes queer coding through symbols more literally. These works extract and distill a new visual language that is specifically designed to upend preconceived notions of gender and desire.

In all honesty, I came into this show pretty skeptical. The amount of culturally specific shows that have been cropping up in seemingly every gallery space I step into in the last several years has been exhausting. Exhibits like 30 Americans (Nelson-Atkins Museum of Art, 2019), Magnetic Fields (Kemper MOCA, 2017), Monarchs (Nerman MOCA, 2019), among others from local galleries like Leedy Voulkous, Front/Space, Open House, Plug Projects, La Esquina, and Vulpes Bastille. All of these shows have done an excellent job of bringing the underrepresented to the forefront. They confront a lack of support in both the art world as well as our social architecture. We live in a sufficiently messed up world ruled by the actions of ongoing cultural warfare against the margins of society. The redlining of Kansas City, the dissolution of Queer protections within our government (Sesta/Fosta, restructuring of PACHA, the alarming number of Anti-trans bills), and especially the constant villainization of immigrants and native people through policy changes and rhetoric. I am always happy to see what artists with different experiences than myself can do when allowed to speak about the issues they hold close to themselves. However, it can also be mentally strenuous to be aware and feel powerless by the ebb and flow of cultural paradigms. That doesn’t mean that these aren’t hugely essential shows or ideas. Still, the trend to make the art world a loudspeaker for political issues of this scale can be daunting for both the artists involved and viewers of these shows.

Queer abstraction (the term, not the exhibit) is embedded in my own practice and something I feel passionate about. I was worried about witnessing a presentation that would give me FOMO, and also strike at my specific frustration toward being told throughout my career that I’m not gay or queer enough to be included in the conversation. On the other hand, I’ve felt lucky because I have never been pigeon-holed as a queer artist. The last thing that I want is to have baggage follow my work and cloud my viewers’ judgment. That is not to say that I ever feel less gay or obtuse to the mainstream when I’m exhibiting my work; it can get rather hot under my mask. It does beg the question, what is the determining factor that concludes work or the artist who creates it, queer enough for inclusion?

On their own, grouping sexual, racial, and ethnic minorities to several group shows do very little to support equality or promote the wide-ranging appeal of the artists within them. There is nothing wrong with being a gay man making work about being gay. Being placed in a show where everyone is doing the same thing sets a couple of problematic precedents. One is that work about being queer is only appropriate next to other artists about the same topics. The second being that it’s easy to pin down the artist as one that’s only relevant to the LGBTQ+ communities. We tend to agree that generalities lead to misunderstandings. This is the basis of the argument for why stereotypes, while often based in some truth, usually miss the mark. Cultural stereotypes are based on a notion of otherness, which in turn promotes some understanding of what is normal by what we have decided is not.

The upside to queer abstraction is that with the multitude of identities and variations on the concept that it represents, it’s hard to pin down too many apparent stereotypes. Stereotypes and queer coding take up a big part of the stage. One could write a whole dissertation on the use of phalluses and tunnels throughout the exhibition. There is also plenty of work that, if presented without a placard, would be difficult to peg as queer. Bo Hubbard presents a beautiful tufted wall piece titled Moonflowers using white, brown and beige amorphous shapes. Without the explanation that this is about how gay men and other queer people tend to cling to LGBTQ+ nightlife, there would be no indication otherwise that this was a queer piece at all. That’s the beauty of it; in another exhibition it would hide in plain sight. With the context of this show being ostensibly only two words that are so broad and open to interpretation, I did spend an inordinate amount of time trying to find the dicks.

So many artists have been influenced by this type of sweeping political inquiry, but where do we go from here? Is there a way to keep the art world from capitalizing on cultural discrepancies while still supporting the messages? I’ve been thinking about two possible ways to shift the conversation away from all out segregated survey shows. One would be to focus on mixed context shows that share similar material explorations. There would still have to be a concerted  effort to include voices and under-represented artists from different communities for this to work in a respectful manner. This could replace some of the need to address a lack in large institutions in a way that tokenizes certain groups of people. This strategy is currently in play by many galleries, but the media attention that segregated survey shows tend to dwarf their importance.

The other mode of curation would be to create a culturally focused survey show but avoid marketing it in a way that overstates its importance. This can be a bit tricky but I loved the way that the Kemper Museum of Contemporary Art handled this with Magnetic Fields. There is very little written on the idea that this was a show based around addressing the lack of awareness of female artists in the contemporary art scene. This allows the work to state its own importance rather than an audience member being told that it is important by the title. This also avoids people walking in with preconceived notions of what female art should look like. We’ve all heard the phrase “show, not tell” which is something that curators and press release writers need to remember more often.

There can still be critical discussion and intellectual support for these types of shows. If museums continue the trend to make a big deal over these cultural survey shows, they will inherently squash debate and halt any efforts to create equality through them. Survey shows and their curators aren’t necessarily at fault here, but they need to trust their audience. This is where shows like queer abstraction and 30 Americans falter. In the end of David Getsy’s ‘Ten Theses of Queer Abstraction’ he posits that queer abstraction and other socially important work isn’t something that we want all the time, for the same reasons we don’t speak in prose to each other everyday. If we can balance this better, it’ll make our messages all the more impactful.