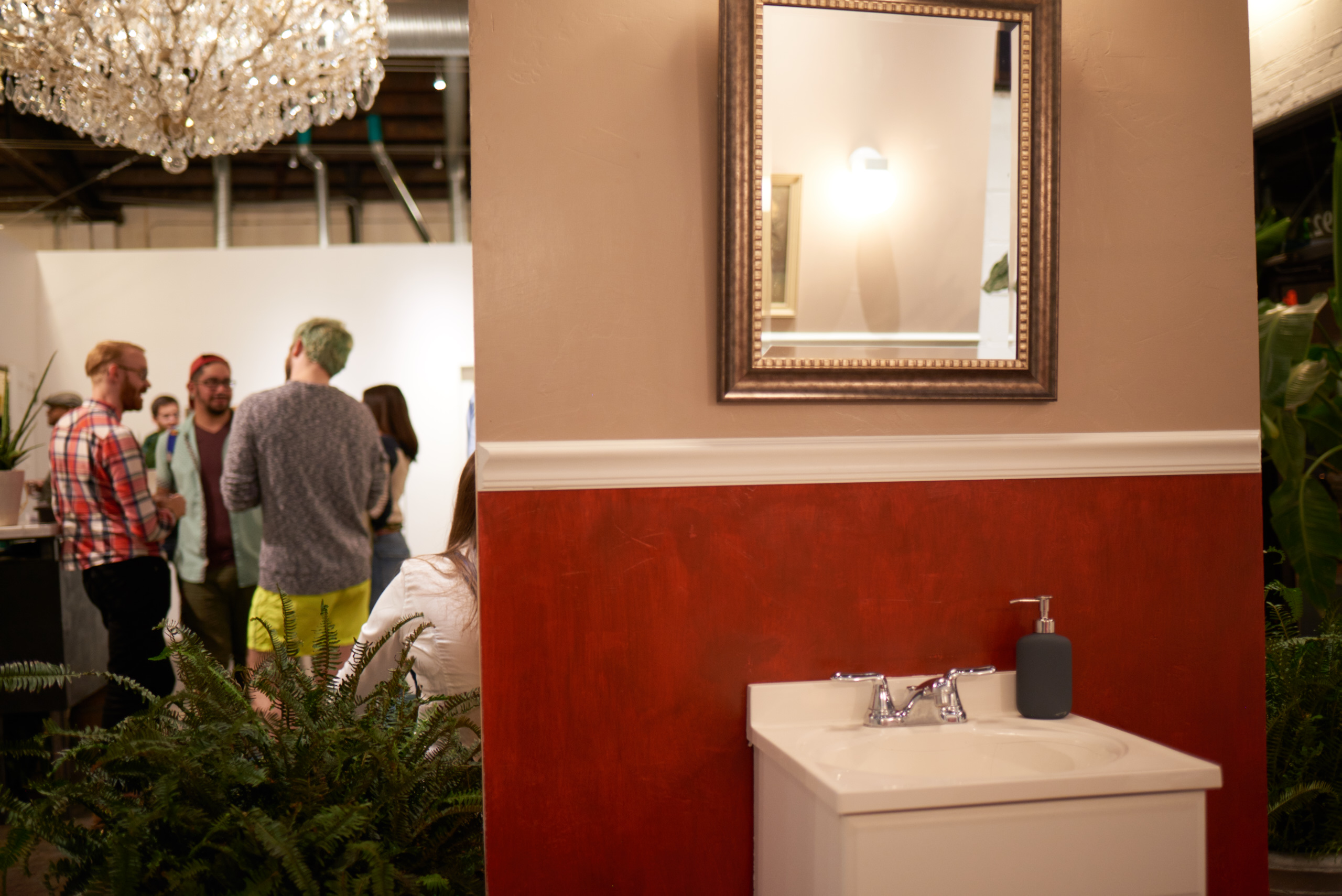 Trey Hock Wants to Take a Selfie With You in The Mirror Self.ie 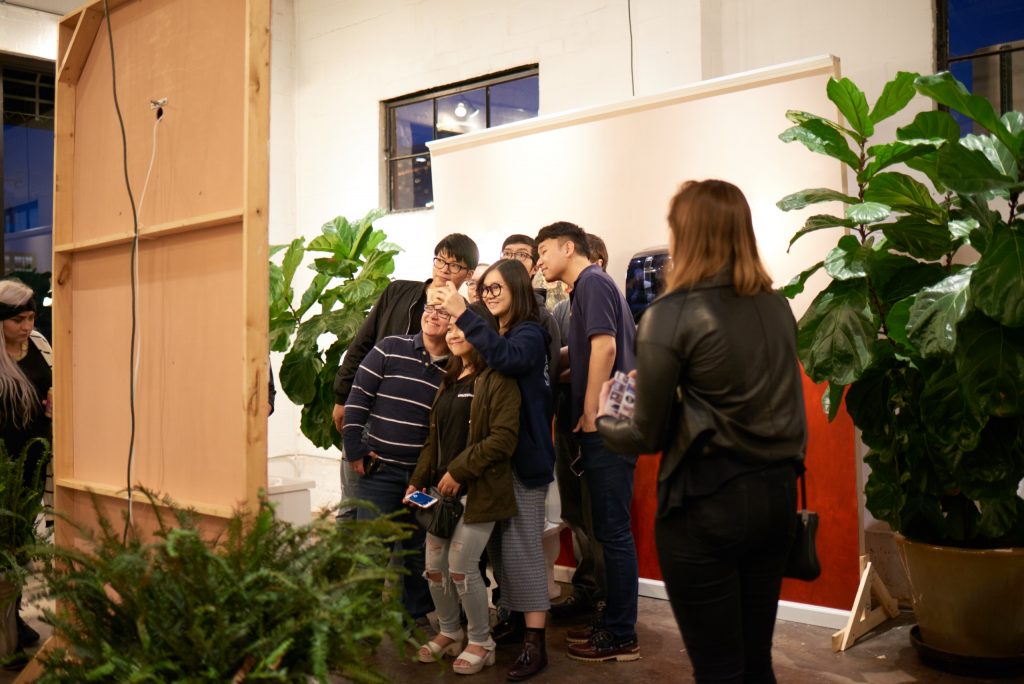 Image from the opening of The Bathroom Self.ie by Trey Hock. Image by Megan Pobywajlo

Trey Hock’s recent exhibition The Mirror Self.ie was curated in a space centered around one particular, yet unlikely public installation of a makeshift two-walled bathroom. I had the chance to view this show during the opening on First Friday, while also speaking to spectators and watching Hock – a local critic and Filmmaker –  interact with the work himself.

At first glance, this was a show that exploits the contemporary practice of taking a selfie, and asks viewers to question the very act of these selfies as both a private and public act of self reflection and narcissism.  Viewing these works on a larger scale rather than a cell phone screen allowed one think critically about this practice in a way they wouldn’t on a social media platform. The prints presented on the gallery walls shared the same quality as cellphone photos, which was evident in the resolution. As this would normally distract from what was being depicted, and written off as a technical error, Hock made an interesting connection using the low resolution to make the means of capturing the image evident to the viewer. 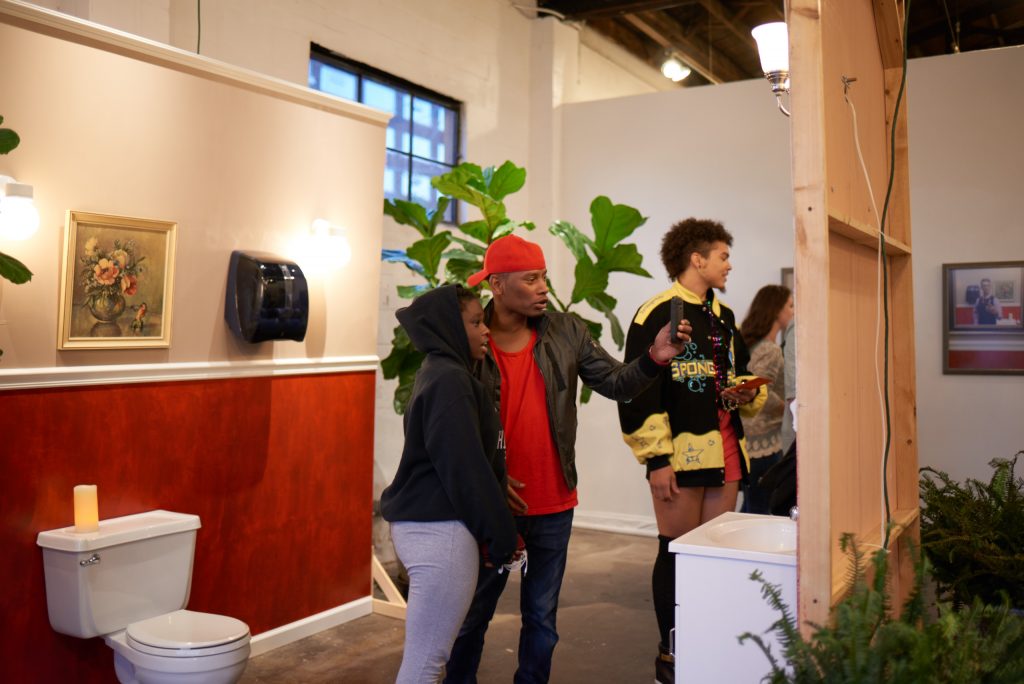 Image from the opening of The Bathroom Self.ie by Trey Hock. Image by Megan Pobywajlo

The selfie can be dated back to 1839, but is still frequently utilized in our current culture through the use of social media.  This practice of presenting yourself in a certain likeness has gone from Robert Cornelius’ daguerreotype to the ease of a quick Snapchat.  With this evolution of the selfie within media comes a question of reproduction regarding the identity, self-representation and how we fit into these social constructs we build for ourselves.  Trey Hock addresses this by presenting numerous amounts of selfies taken in an environment that is less ideal, a bathroom, a space that is now seen as passé after its heavy use in the early 2000’s on Myspace.  While this subject matter is extremely relatable, it possesses some dark undertones of self reflection and modes of questioning the authenticity of the reproducible digital image.  In Roland Barthes “Camera Lucida,” it is said that every time a photograph is taken, it steals the soul of the subject.  In the case of a selfie, does channeling your appearance multiple times start to affect your essence as a person in real life? Hock answers this question by presenting these prints large scale, as a personal take on questions of vulnerability and how the effects of social media makes us more susceptible to these insecurities.
The prints themselves also carry a dissociative feel.  In the photos, the act of taking a mirror selfie is apparent, but the location is not.  The same bathroom is present in multiple photographs, but the construction of the composition is reliant on the other sense of location that is being explored.  The set represented in the photographs was positioned to resemble a normal bathroom. However, as the viewer moves through the exhibition, the location of the constructed bathroom becomes clearer.  The photographs were taken outside or in unrecognizable places.  By prompting the larger question of private action in public locations, it showcases that Hock thinks about the act of voyeurism in both contexts.

Aside from the various prints, viewers were engaging with the space in a way that was already familiar.  With the presence of the same bathroom that is apparent in the photos, it pulled the audience into the context in which the artwork is being made.  By initiating a hashtag on Instagram – #tmsbeco –  the work lives in an online environment as well as in a gallery space.

Trey Hock’s Instagram persona with middleagedbathroomselfie puts a context to this work.  With his entire feed bombarding the viewer with nothing but bathroom selfies in various locations, he turns a social media outlet into an outlet guided towards a specific performance.  Whether it’s on Instagram or in a gallery, Hock escalates the meaning of self-contemplation to new heights with this body of work.