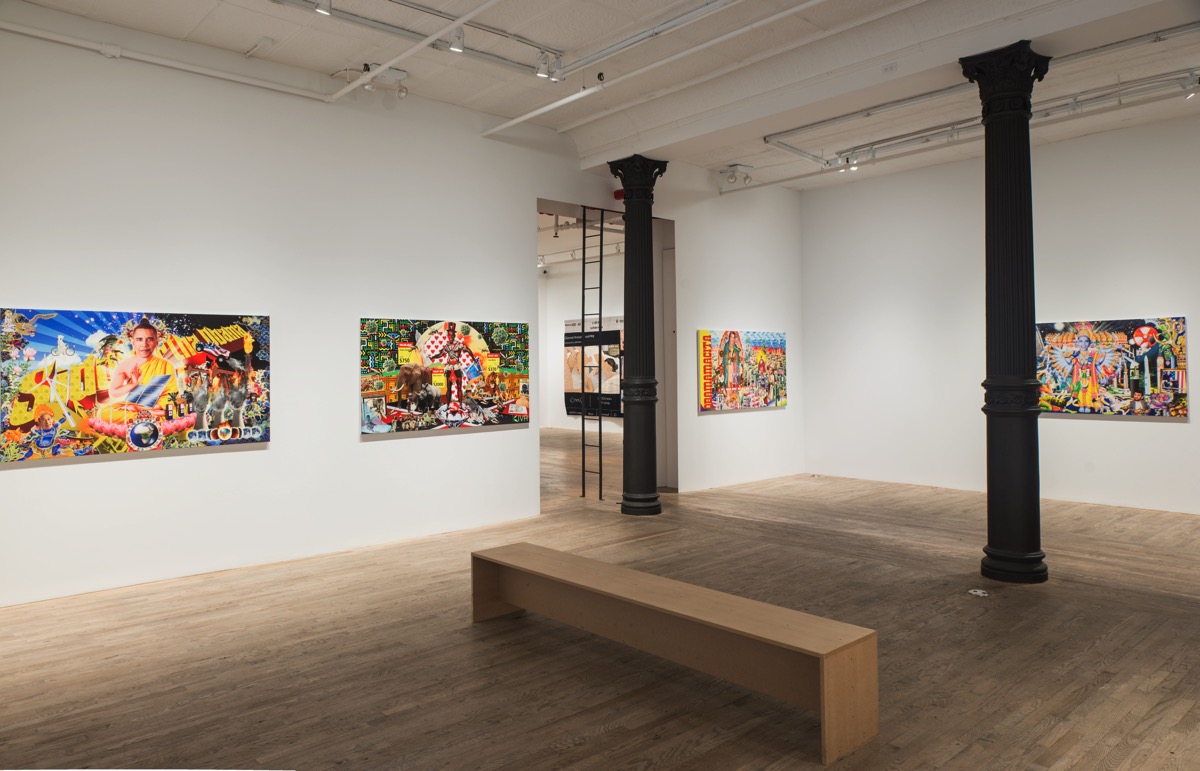 Our current political climate has brought us to state of deliriousness. We resist these forces of political immorality while becoming passive to its effect or otherwise exhausted from the effort. Conversely, there are artists acknowledging and responding to our collective feelings by taking their work to a place of darkness, that surprisingly shines a light on these conditions.  Two ideas such conditions bring forward were recently shown in the dual exhibition at Postmasters Gallery NYC entitled In G.O.D. We Trust and CON-Figuration (March 18 – April 22, 2017).

The timing is right; these shows were deliberate and crisp as they prod what it means to be making work right now, while also collectively showcasing our media cycle’s lust after violence, absurdity, and darkness. These exhibitions posed some worthwhile questions: do we stay and wade in this grim shade we have surrounded ourselves with? This work offers the means to absorb the reality, giving stark imagery of the history of political disruptions, and although absurd, it is seriously no joke. 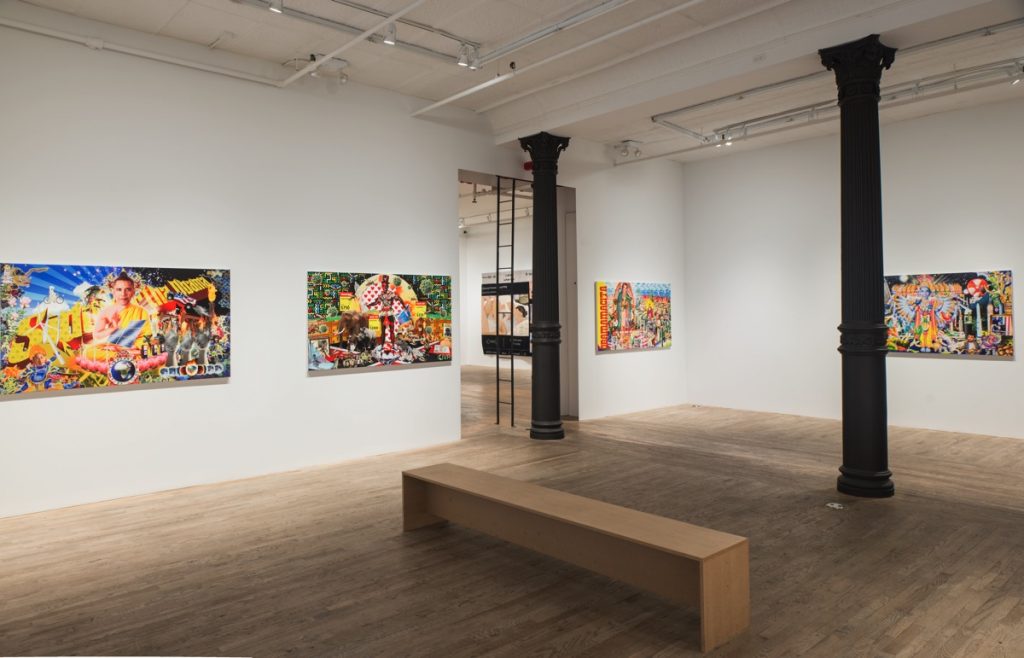 Installation of  In G.O.D. We Trust. Image courtesy of Postmasters Gallery NYC

In G.O.D. We Trust  — G.O.D. standing for Global Obama Devotion—  is the title of a video and accompanying stills stretched on canvas by Chinese-American new media artist Kenneth Tin-Kin Hung. The room was filled with video game noises you’d hear in an on-screen battle. The sound activated the stills hung around the first room of the gallery, mimicking the motion of the viewer’s eyes as they bounce from one icon to the next in this vivid cut-and-pasted world. These icons included images of former Presidents Obama, Clinton and George W. Bush, along with seven religious prophets that Obama morphs into throughout the course of the video. This created a narrative that outlines the various global and domestic problems the Obama administration faced early on, characterizing one president’s specific struggles out of many others. 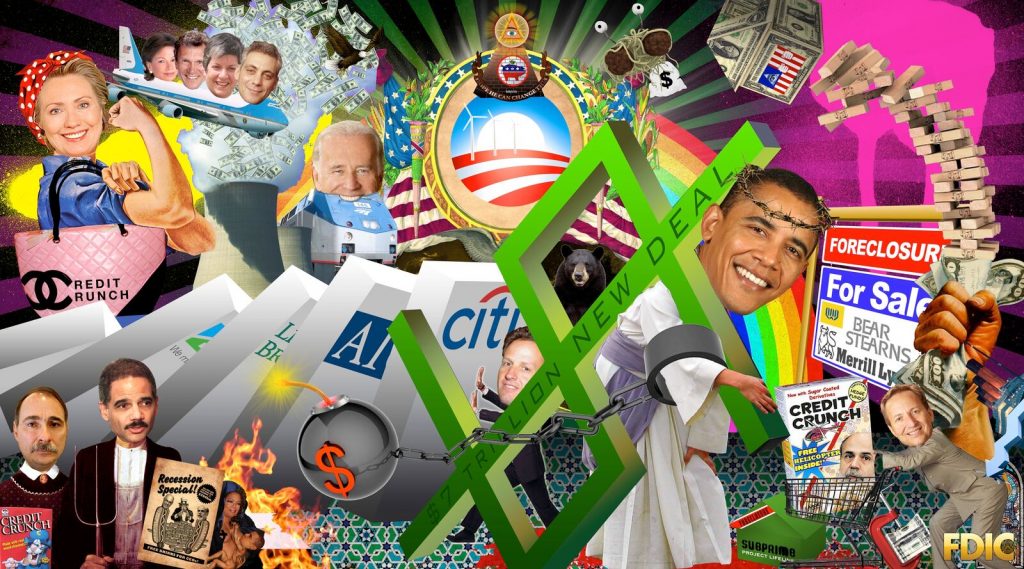 The work is loud; the frames were filled with tumultuous images, which had a hypnotizing effect, making one incapable of pulling away from this hyperbolized political reality. Moreover, the comparisons of Obama to seven prophets hyperbolizes him as an idealized savior, placing on the role of the president the duty to somehow save the people. This reliance we the people have on our president to be our “Messiah” is highlighted through this portion of the video, where he morphs into the figure of Jesus Christ and carries the weight of the country’s debt like a cross. To go along with the analogy, if we as believers continually place faith in one with the bigger plan, or a higher power with knowledge unknown to us, we will serve no purpose nor make any changes in this world if we do not act ourselves. Furthermore, in this world of people looking for change, we must be wary of creating and following false prophets, especially ones as human as the president.

While less politically direct, this room was filled to the brim with even more iterations of a deformed reality. At the room’s center, Agathe Snow’s sculptures balanced between the two pillars that cut through the center of the gallery. Insouciant (top hanging figure), Don’t Stress over the Turkey Daddy… (bottom figure in mangled chair structure) and Dad is always stressing about his job (figure on stilts) are uniquely positioned. These bodies reflect their titles of both indifference and stress, every figure weighed down by themselves, barely supported by the structures they lean on, exemplifying the potential apathy that rises out of the effect of stress or anxiety. These long limbed figures mimicked the positions the bodies hold in the paintings sharing the space, all sharing a similar body language that is paused in tension, even in a pose. 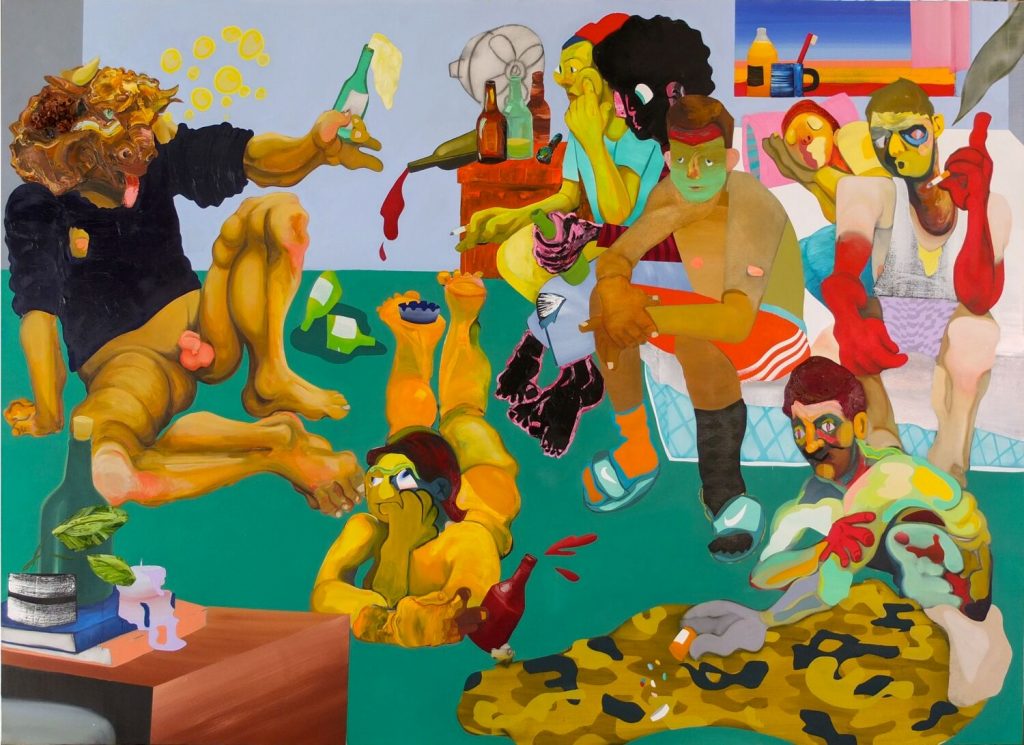 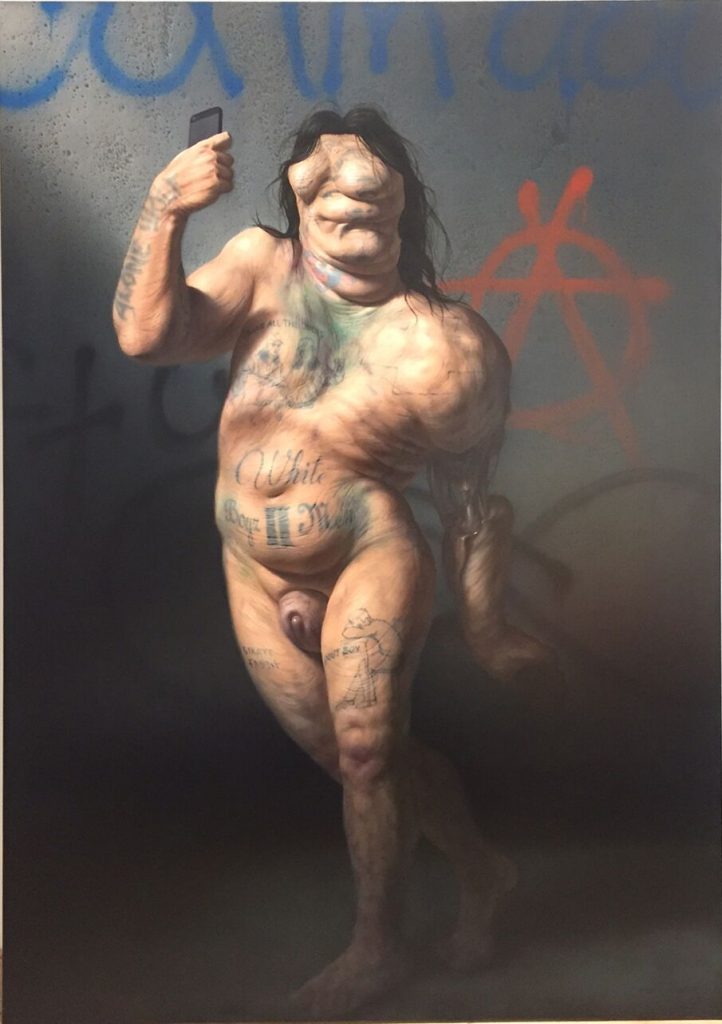 Canyon Castator’s Tipping Point (left) contains distorted figures that echo the form of the ghastly figure in Christian Rex Van Minnen’s Selfie In Casmate Beneath the Bridge to Better Days I (right) just across the room. Both painters’ works are redolent of historical paintings which have been twisted into contemporary turmoil. Surreality and skewed perspective within the paintings enthrall me and deliver a space aberrant of typical depictions of the body’s anatomy. 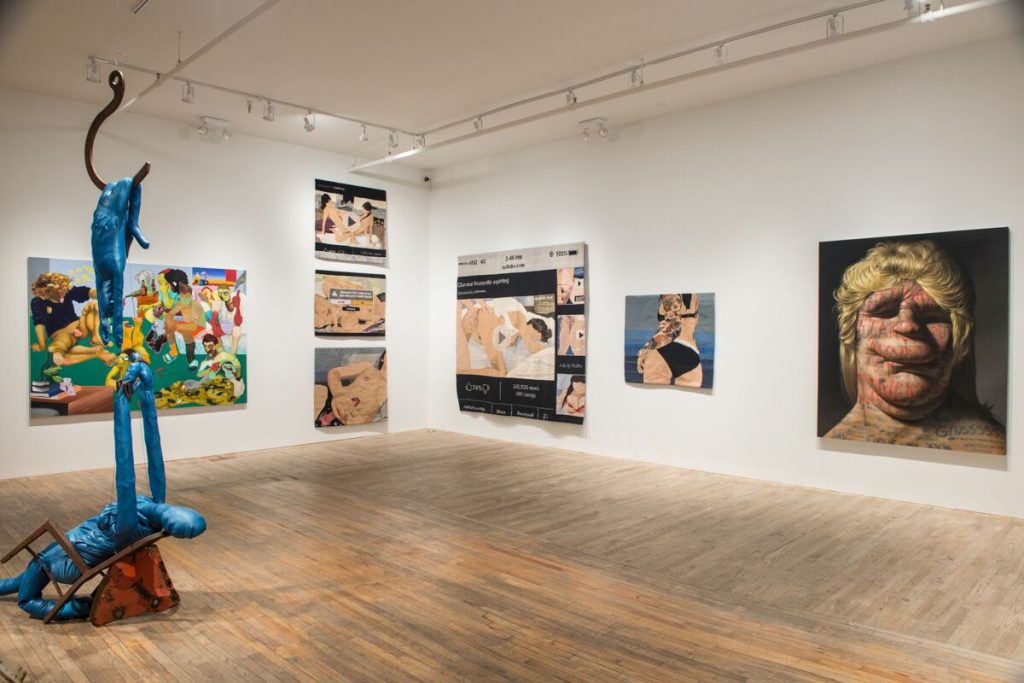 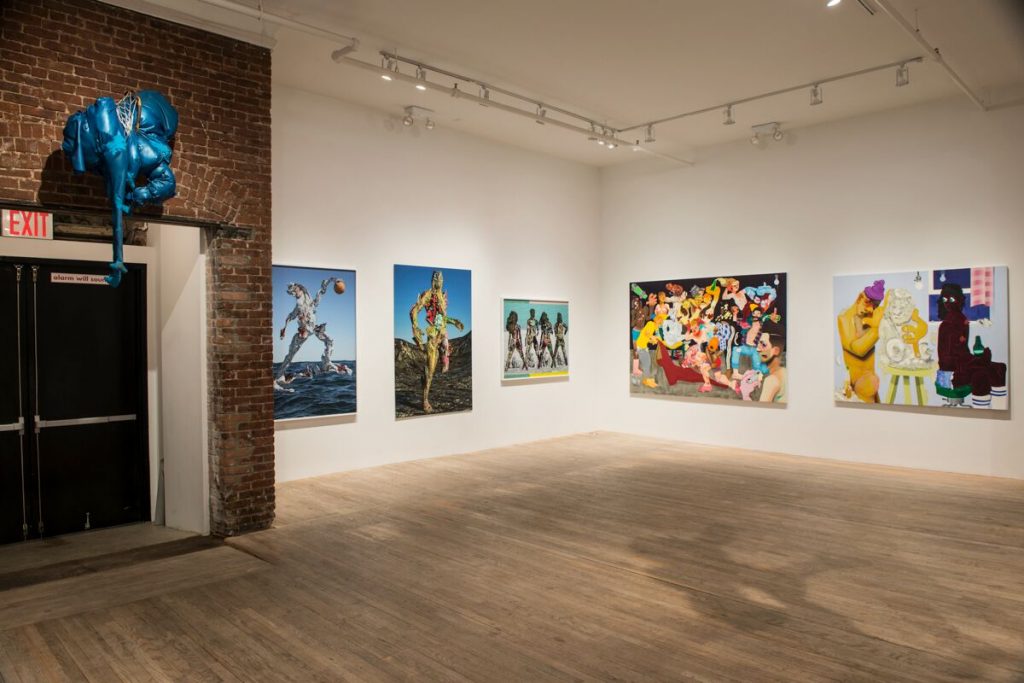 All of the works which surrounded Agathe Snow’s in-between space created an environment even more overwhelming; the walls of these bodies showcased as physical manifestations of the potential effects that a polluted world has on the mental and psychological states of a person. The stress is real. Erin M. Riley’s soft, pornographic weavings and Shamus Clisset’s 3D digital renderings of cyborg-looking figures are iterations of digital worlds that remain entirely different from each other. However, in each work I see an element of strength personified in the stances, positions and scale the bodies fill in their frames. The dominance of these figures potentially act a figures of indestructible resistance, although they are still under an affect of the twisting hypocrisy and dimness prevalent; all of the images participated in creating a setting submerged in surreality where the states of the figures became surprisingly real.

The materials and figures in both of these exhibitions twisted and turned in their frameworks; they carried weight. They highlight the dichotomy that exists in American media that can fetishize and normalize violence and demonize sexuality and intimacy. These works have been brought into this dark world, as these artists are perceptive of this reality. We are collectively enamoured with this dark side of reality that effectively transfixes humans into a place that may frighten us to a point where we want to escape this place, even if we have just dipped our toes in a little. When we leave, that is when we have the chance to respond to and resist these responses of darkness, and turn it into light.

These shows, in clear conversation with each other, very successfully iterate a world that has been soaked in social media and its proliferations from “fake news” to virtual reality that are so enticing we can’t tear ourselves away from them. Creating and becoming a part of a community that makes and embraces artwork under the hand of the leader that is taking away important resources, whom I would never consider a prophet, is a way to raise awareness, resistance, and the need for action.