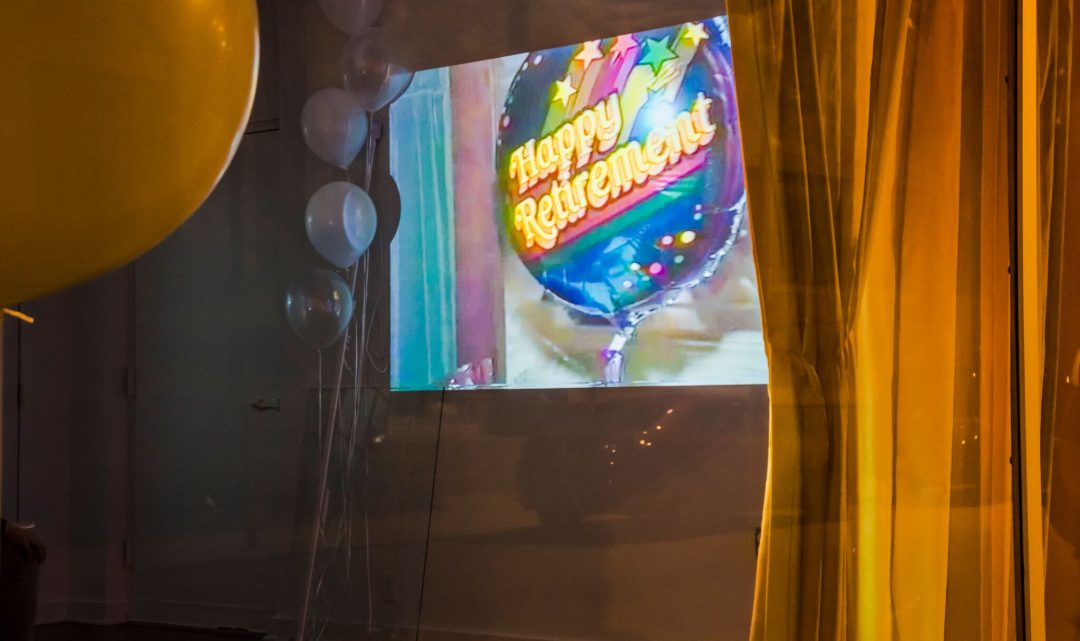 The following piece is a fictional response to the performative exhibition Perfect Sunset (there’s nothing sad about it) by Kristen Cochran at Front/Space. The show centered around retirement parties and examined the idea of endings. 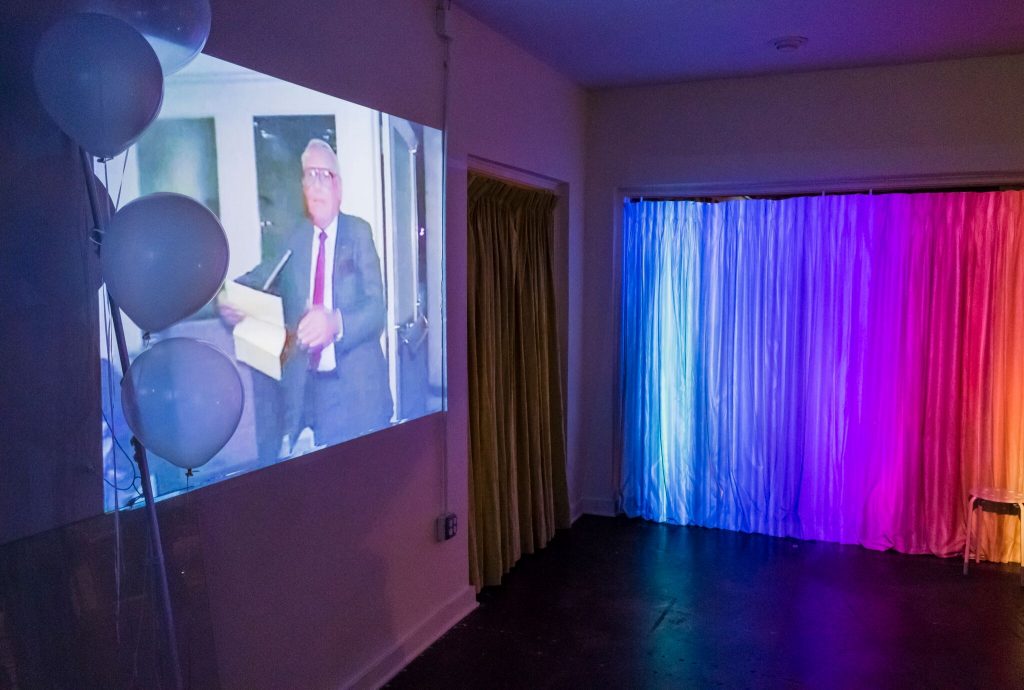 The cake was exactly the cake you’d expect. It tasted like every other cake you’ve ever had. Smooth white frosting in a thin layer over chocolate cake that was once fluffy. You taste the plastic fork in equal parts with the cake. Even so, it’s gone too quickly. You hold the empty paper plate and plastic forks like props. Your hands have an occupation. Very sensible.

Though Al is hanging up his shirt for the final time, though all that’s left are seams and cuffs, he buttons the tattered cloth, squares the shoulders onto the hanger before turning away. Ready for delicate retirement. Starched blues traded for a night in a tux, traded for a year of Bermuda shorts, traded for a blanket of earth, deep.

Al greets his guests, his handshake crisp with arrogance. He walks the way a cowboy would walk, knees never quite bending, swinging each leg out the side before bringing it forward, a meandering kind of step that demands space, a right to its own pace.

Excepting the bolo tie, the son is the embodiment of aspirational neutrality. He is here to tell the family story, the story of the acquisition of cars and homes, footnoted by changing heights of children. A white balloon looms and bobs over the corner of every projected slide, every image refracted through its white body. There is mic feedback. Exuberant laughter surrounds each image and the son’s self-effacing commentary, relieved by happy exhales in the dark intermission of slide changes.

We see a baby with mouth agape, mother’s lips a crescent, her smile forever at half mast. We see presents underneath a Christmas tree, a flood spreading across tan carpet, drowning the frame, the brother a cropped sidenote. We see a wedding party arranged tidily next to a server’s tray of sliced cake. We see three women, stuffing a turkey in a golden ratio, arms at Michelangelo angles. We see the story of the women’s movement as told by the purchase of mom’s new orange Camaro. We see a family clustered on the edge of the blank concrete patio of a shit-brown house, white clothes blinding the exposure.

Let us toast the new car, the borrowed boat, the new house, the vacation.

The wife grabs her gold glittered top hat and hikes up her starched white skirt, revealing legs shaped by white hose. Her head cocked, smiling into some imagined sunset, she begins tapping. Her tasteful white shoes tap out an unexpected rhythm. Her skin shimmers. The crowd is in upheaval; a reaction equal to a walrus leaping out of the water and performing Swan Lake, to a baby sticky with placenta reciting Shakespeare’s verse, to your mother cooking an edible meatloaf.

The woman in the blue suit embroidered with glass beads bats her empty eyes: “Why thank you so much for this lovely dinner. I just wish you and Hilda all the best!” She blinks. “I wish you all the happiness.” A beat, her eyes a vertiginous void. “Bon voyage!”

There is a man so sturdy that he could wear a pink shirt in 1988. He gestures across the room as his vowels are compressed and his words sprawled out. “Al said I made too much money,” his laugh like a cough. Thick hands cast out heavy words. “You taught me that…you taught me expense reports are creative writing.”

From the corner of the room, he says twice what a pleasure it was to have made Al’s acquaintance. At night, in his California King bed, watching ceiling shadows swell and recede, he would wonder if he had a voice. Or, if, instead, every sound was swallowed by the cosmos, inconsequential, if he himself would fade away, into the quiet dark, into a place where his house his children his fears his California King bed never existed at all.

WINNING IS NOT A SOMETIME THING; IT’S AN ALL THE TIME THING. THERE IS NO ROOM FOR SECOND PLACE.

In all the years Al worked at the window blinds company, his secretary never read the Vince Lombardi speech on the pegboard.

She recites now as tears fall on her broad yellow lapels.

“That’s Al,” she says, “It sure is.” A voice encourages the secretary with the lapels to finish.

I FIRMLY BELIEVE THAT ANY MAN’S FINEST HOUR—HIS GREATEST FULFILLMENT TO ALL HE HOLDS DEAR—IS THAT MOMENT WHEN HE WAS WORKED HIS HEART OUT IN A GOOD CAUSE AND LIES EXHAUSTED ON THE FIELD OF BATTLE—VICTORIOUS.

Al’s red tie is violent against the hotel ballroom’s palette of grey and grey. He has the nonchalance of the entitled who’ve never asked questions, of one who carries blind trust in bounty. He describes his blessings: “Benito Mussolini did not get a dinner. Fidel Castro won’t get a dinner. Daniel Ortega didn’t get a dinner. But I, I have gotten a dinner I’ll not soon forget.” What color are his eyes? They look like something to be strung on a necklace.

He never did buy the boat he wanted. All he can think about now is the sea wind on his face. No windows to measure, no warranties to push, no telephone calls, no children, no earth to feel beneath his feet, or to be buried in.

A fog descends from the sky like a dog loosed from its chain; swooping through the open patio door, masking the clouds of white hair on women’s heads, embracing the white balloons as lost cousins, floating the white tablecloths, disappearing the guests into their final honeymoons.

You dreamt you had a body. And you wore a white-sequined shoulder-padded blouse. You flew over the water while the Indiana Jones theme song played. “There’s nothing sad about it,” you whispered.