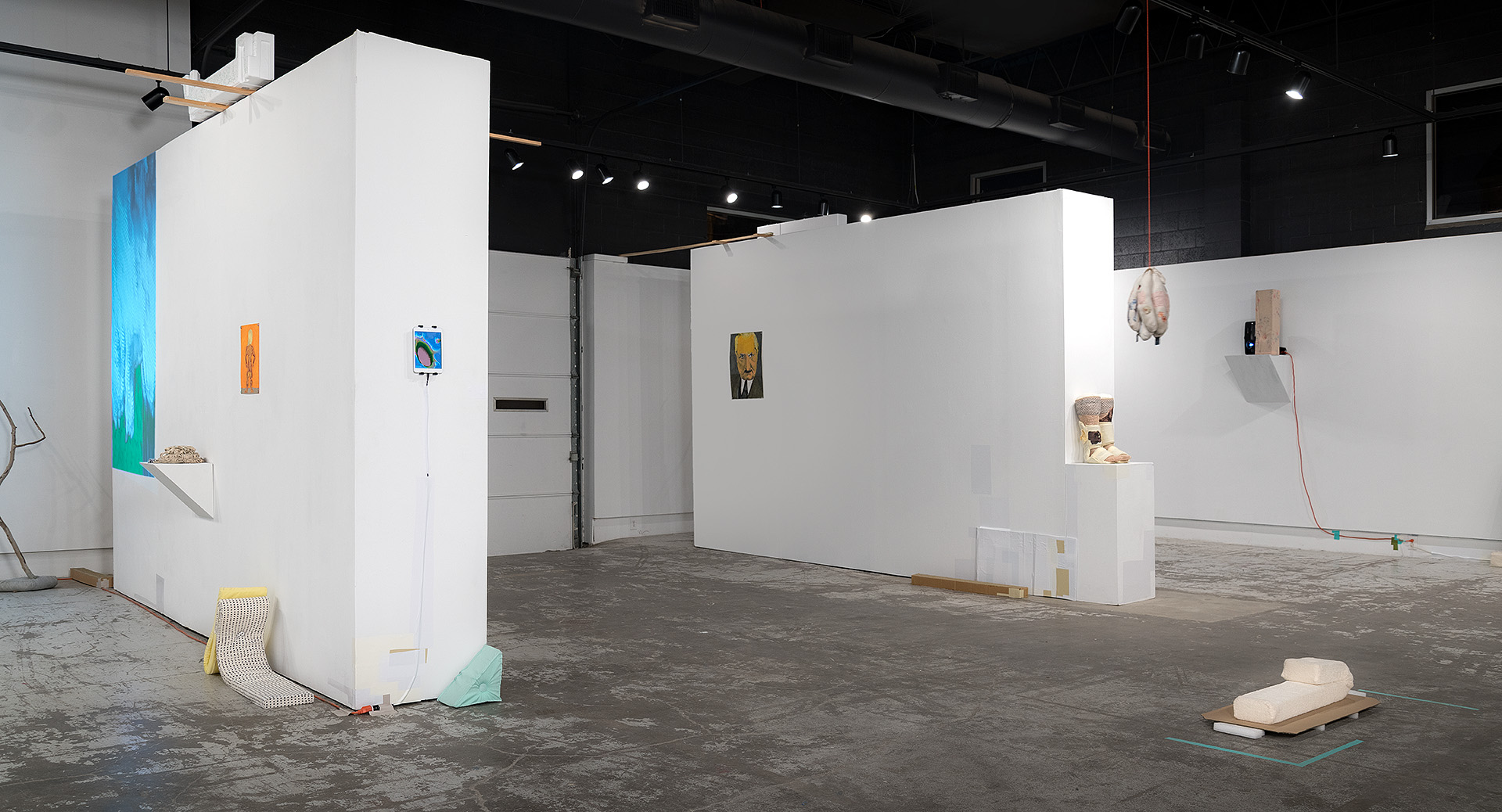 Vistas of Decay in Mirror Eupepsia

The death drive was alive in Mirror Eupepsia, an exhibit about decay and transition. Monstrous portraits, deconstructed digital video, and haunting mythological symbols created an environment for the viewer to not only digest, but decompose, while held in the softness of collaboration.

The wide floor-to-ceiling windows of the gallery were partially obscured by white fabric, strung up between two pieces of wood sunk into concrete. Here was a banner inviting your projections, or perhaps a shield to protect and contain, or simply a place to reflect and digest.

This show is about the path of decay, but do not expect certainty along the way. In the current sociocultural climate, we are experiencing a decay of the social contract, an erosion of feeling responsible towards one another, an uncertainty of belonging and connection. When we look at one another we often see ghosts, monsters and fragments, rather than kin.

As with any art exhibit, this was an opportunity to reflect on aspects of ourselves and our world. However, this particular mirror was filled with decay, degradation, ghoulish figures and nightmarish symbols. Curator Annie Woodfill called this reflection a mirage, a hallucinatory projection. Reflections are not static or stable, they are ever shifting, and ever eroding.

In the accompanying printed matter, there is a lengthy section called “notes” that presents, without commentary, a transcription from a YouTube lecture by psychology professor Harry Heft entitled, “The ecological approach to perception & action.” The professor discusses the way our brain assembles static images into our perception of a continuous world, through vistas and transitions. We learn by constantly shifting perspective over time.

Elements of mythology and fairy tales appeared in Julian Chams’ sculptures. Old socks stuffed and strung up from the ceiling, patched with images of flowers, and dangling x-rays of teeth. Nearby, a sculpture of lower legs and feet that looked soft from a distance, was braced in padding. Up close, one could see the near-flesh-colored fabric is studded with staples, and embellished with images of swarming anthills. Teeth and feet are potent symbols in many lineages of myth and magic. These works felt intimate — who wore these socks? upon whose legs do you wish the pain of staples? — or like a manifestation of nightmares.

Harper Hair’s often-ghoulish portraits were invitations to find a face. In a portrait of Heidegger, Hair embedded grid lines like guidelines as if to transparently embrace the artistic process. The painting also echoed a cage, stripping the freedom of the subject even in death, by containing a man who both left an indelible imprint on philosophical thought and was a member of the Nazi party.

Another one of Hair’s portraits had a subject with a face appearing to melt, disintegrate, being just a little too malleable. The subject smiled through the disintegration of her face; there is a courageousness in presenting yourself as flawed and failing. Or perhaps she’s a portrait of those willfully oblivious to the decay–to the environmental degradations and human injustices and all-around horrors of our world. As though if you keep smiling your face won’t melt off.

Hanging nearby was Sepideh Majidi’s degenerated video of a dead and decomposing bird. Majidi’s other videos are abstract, digital forms dismantled. The remaining layers, having been subject to digital deterioration, become surprisingly organic. Their colors sometimes connote life; their motion sometimes look like the softness of breath. In Majidi’s artist statement, in order to create these videos, the files undergo “cycles of trauma,” which may be why they seem so relatable to us humans.

A materiality of collective trauma was held across this exhibition. Decay, degradation, and fragmentation leave us with pain, grief, and fear. In instances of trauma and loss, healing happens through connection and empathy. The curatorial environment provides an offering of a substantive alternative to decay: collaboration and community.

That alternative also appeared in the elements of softness and vulnerability in the exhibition, providing both tension and opportunity. The softness of fabrics, padded cushions, images of greenery all belie the nightmarish qualities in the exhibit. Looking beneath a slipping facade can be unnerving, but necessary.

In an immersive, decentralized experience the curators used their own found studio objects — cushions, tape, sticks, concrete — to provide a shared environment for all the work in the show. In several instances, the curators’ work literally supported an artist’s piece — a tapestry of Julian Chams’ photography strung between two branches provided by Annie Woodfill; Sepideh Majidi’s video work played on a screen supported by a soft cushion from Monica Dixon; Harper Hair’s portrait mounted on cardboard that popped out from the wall. The eye was drawn around the space — the curators’ objects are on the floor, and tucked atop gallery walls far above eyeline. This “ecological collaboration,” in curator Annie Woofill’s words, was a visual through-line for the exhibit.

The physical collaboration between artists’ and curators’ objects break down traditional boundaries, echoing the decay and erosion of the artwork displayed.

The chosen arrangement of objects demonstrated their own constructedness. That is, the curators reimagined the curator-artist relationship as one that is collaborative, and manifested that collaboration in a way that felt playful and intimate, rather than cold and distant. Kansas City’s rich but compressed art community offers fertile ground for reworking prescribed curatorial norms. While using the language of the gallery to interrogate the gallery has its limitations, Mirror Eupepsia succeeded in creating a new conversation that maintained a unified vision while presenting individual components.

This was a show about death, as that is what decay inevitably reveals. Through these elements, Mirror Eupepsia appeared non-static, ever-evolving. Viewers saw only a snapshot of an imagined continuous process. Decay creates opportunities for new vistas to open. In those shifting perceptions, we are learning. So long as the process of decay is active, we are learning; collaborating with and caring for one another might be the antidote to ruin and isolation. When change stops, when the learning ends, there’s only death–until what has rotted and decomposed fertilizes new life.