Sorry, no posts were found 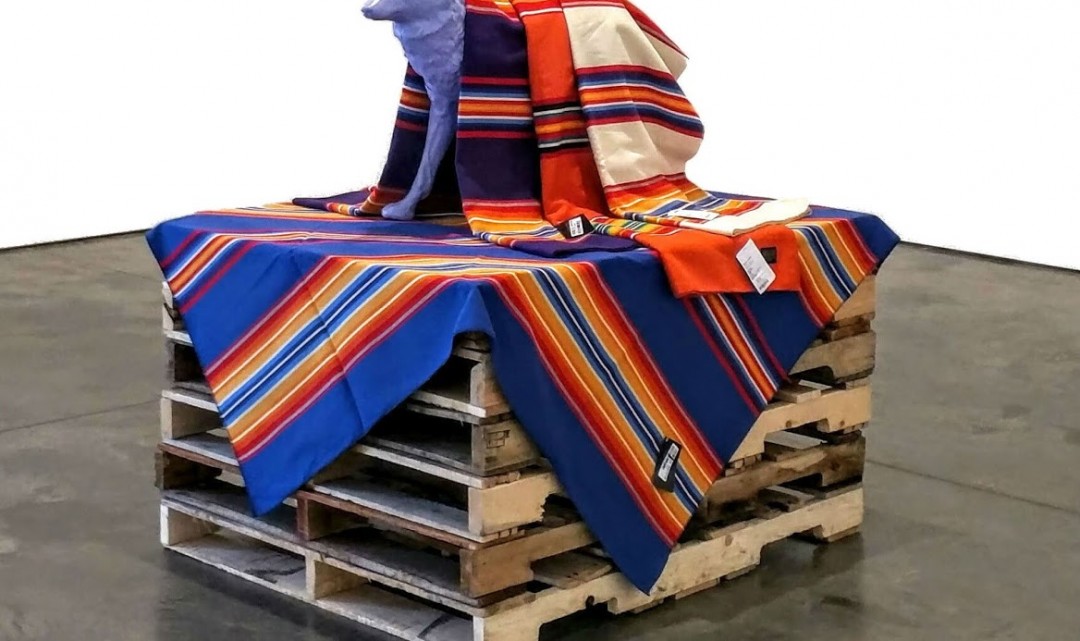 Wendy Red Star Goes for the Gold at Haw Contemporary 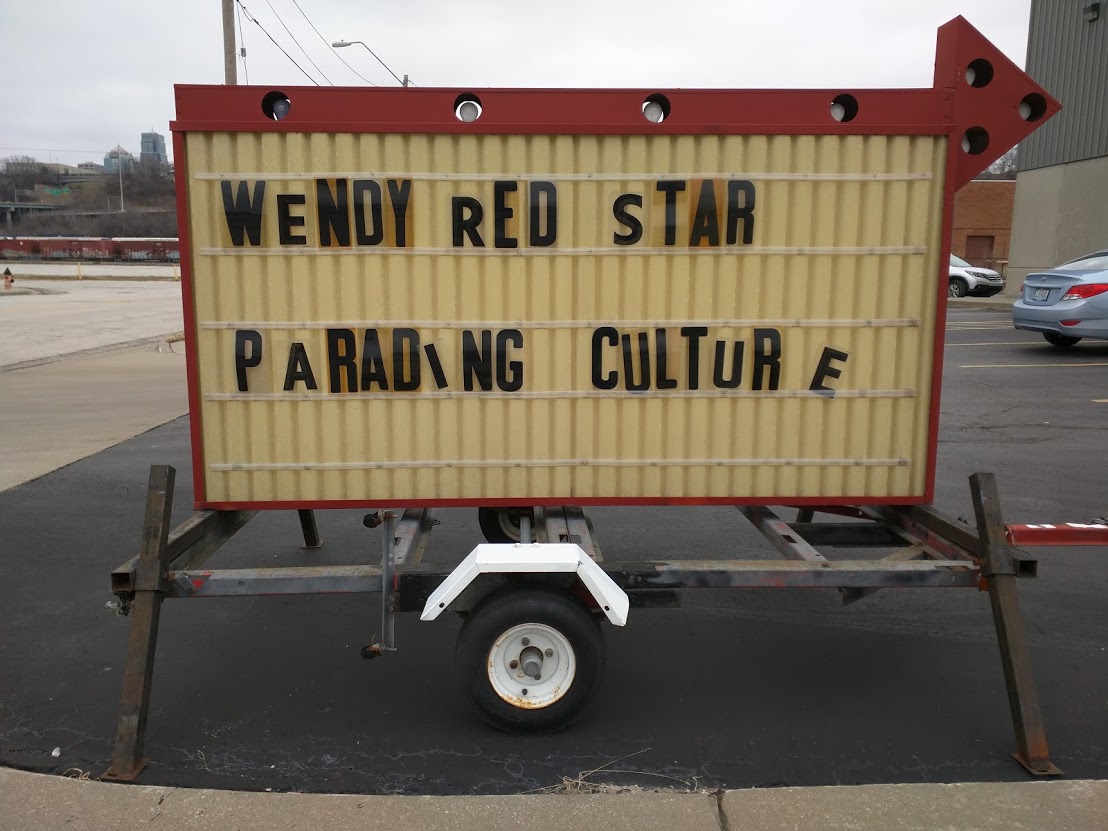 If being a conceptual artist wasn’t complicated enough, try being Native American. The still dominant Euro-American culture thinks your culture has disappeared completely. For more than a century the lens of Hollywood has distorted and dehumanized indigenous people. Museums reflect a deeply bifurcated approach to indigenous artistic production with collections/exhibitions commonly divided between natural history and visual art institutions. The intense taxonomic desire to separate ethnographic material from fine art or traditional from contemporary art seems feeble and pointless in the context of ancient Native cultures with thousands of years of making life into art, material into culture. It’s still going on. It never stopped. 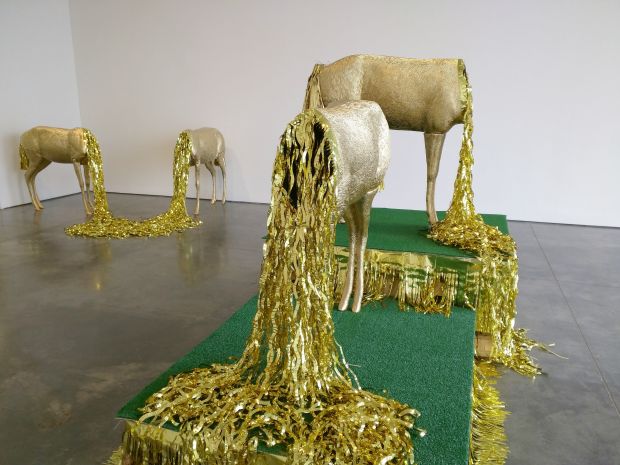 Wendy Red Star moves comfortably through this confusing terrain and pokes fun at the absurdity along the way. In her current exhibition at Haw Contemporary, Parading Culture (Tokens, Gold & Glory), she mines her Crow tribal heritage to bring forth a new body of work full of 21st century paradoxes. It is garish, funny, disturbing and sincere. Most striking and successful is the first of three galleries. One walks in and is instantly faced with two decapitated golden deer gushing streams of gold tinsel. Rapunzel this isn’t. The perpendicular pair of sculptures is elevated on stacks of standard wooden shipping pallets bordered in frilly gold and covered by furry green Astroturf. A similar pair of headless golden doe stand in an adjacent corner with their glittering guts mingled together at ground level. The festivity, however, vanishes faster than a toupee in a tornado.

Red Star’s choice of readymade hunting decoys celebrates the graceful feminine bodies of the doe while reminding us that others locate their value in the head, destined for a wall mount.  These sculptures subvert the practice of trophy taxidermy. She takes them off the wall, pulling out their glorious golden guts on a grotesque parade float, for everyone to see. The relative values of body vs. head, ruminant mammal vs. natural resource, sentient being vs. economic commodity, remain problematic, unresolved and on display as long as they are separate. The disguised presence of the shipping pallets signals the underlying operation of commercial trade that has transformed contact between Native and colonizing cultures for centuries.

At first it was fur and hides that brought about this epic economic exchange between the first Americans and European trapper traders. By the turn of the 20th century, however the animal populations had been decimated with most tribes forcibly removed far from their ancestral lands. In a strange twist Pendleton Woolen Mills on the Oregon Trail introduced the Indian trade blanket to the market and they became instantly popular with dozens of Native American tribes. The Crow Nation adopted the colorful patterned blankets for everyday and ceremonial use to the extent that they have become a prized commodity within their culture. Red Star described them as valuable as gold to the Crow.

In the second gallery she explores the Indian trade blanket as both a medium and subject. In the center of the space the lone sculptural installation of stacked shipping pallets topped by a coyote hunting decoy painted in lilac, draped in carefully layered Pendleton blankets in harmonious colors. It’s worth noting that the price tags are conspicuously left on, their value visible, another characteristic quirk of Crow culture. A series of ten mounted photographs of Red Star and her young daughter wrapped in trade blankets surround three walls. This otherwise charming image is crudely duplicated in variations using the most basic Photoshop filters. The effects undermine the images, seeming like space filler, though it is consistent with the artist’s deliberately cheap readymade aesthetic.

The theme unfolds further in the largest gallery space. Two more pallet installations feature painted pairs of coyotes regally decked out in a rainbow of trade blanket stripes with protruding feather duster tails. One senses that the four-leggeds and two-leggeds and are on equal ground here. Red Star’s coyotes are comically placed on a pedestal, richly paraded and bedazzled in blankets, a fitting tribute for an animal so deeply ingrained in the folklore of the first Americans. Though the predatory coyote has a bad rap from farmers, ranchers, and suburban homeowners who have invaded its territory the species is a highly adaptive survivor. The same could be said of many Native communities that have endured waves of genocidal government policies, not only to survive, but thrive. Another series of eight larger photographs of the artist enveloped in the symbolic wealth of trade blankets mirror each other on opposite walls. The figurative sculptural forms of her blanket poses link more directly to the animal installations without the distraction of software traces.

Wendy Red Star transforms her conceptual-based practice into a playful multi-media parade of color and form. The work revels in the status symbols of her Crow culture as it interrogates conflicting concepts of value, both spiritual and economic. It’s easy to misread her use of readymade consumer materials as inauthentic, even tacky, but the artist embraces the hybridity of Native and Euro-American cultures with intelligence and a sense of humor that bridge seemingly endless contradictions.