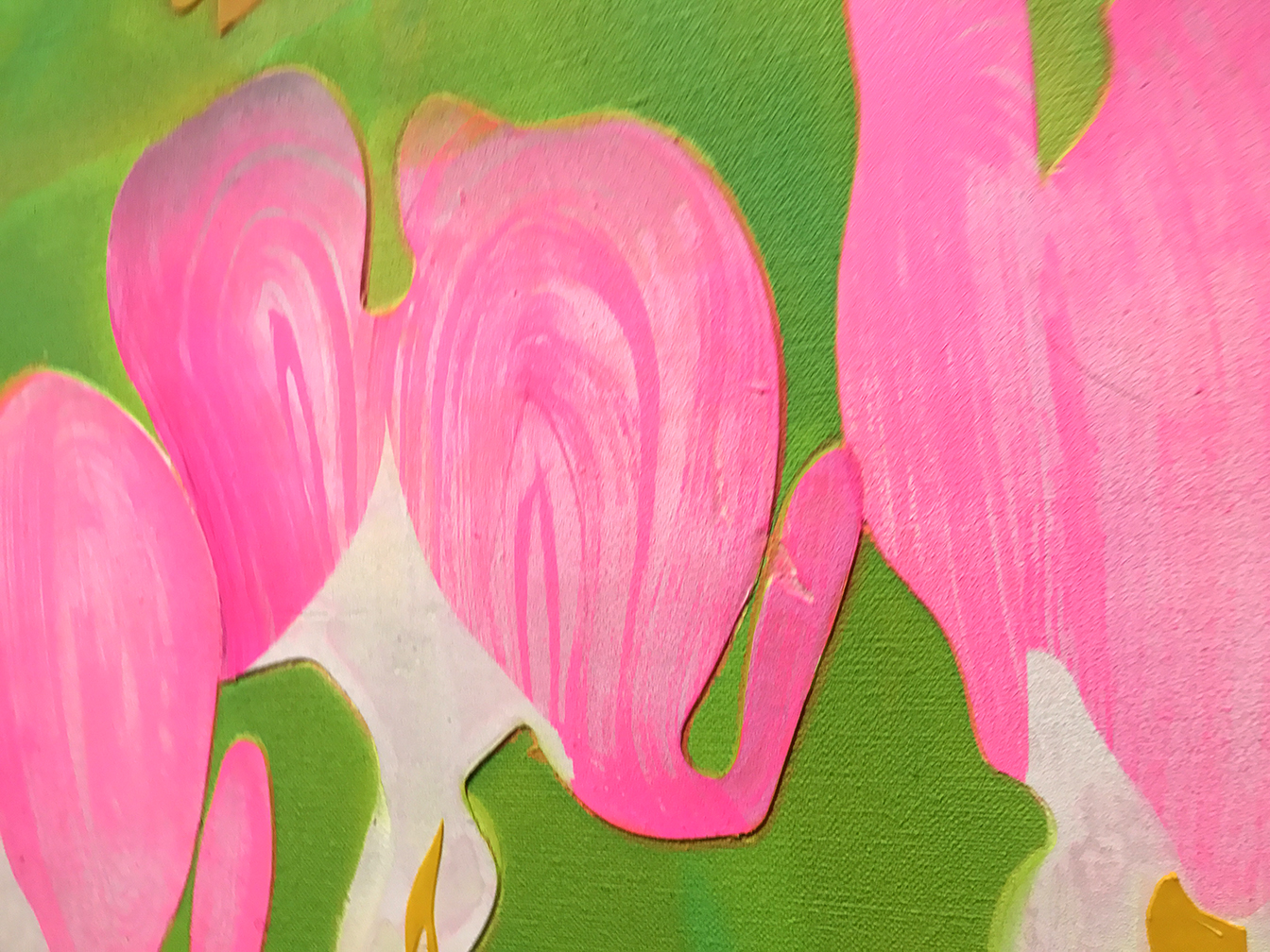 What time is it? Michael Krueger’s “summer winter fall spring”

Michael Krueger makes art that is unexpected:  brushless paintings, silent radios, lightless lamps, feathers that don’t tickle and clocks that don’t keep time. His visual language questions meaning and illuminates what the poet William Carlos Williams wrote, that there are “No ideas but in things.” 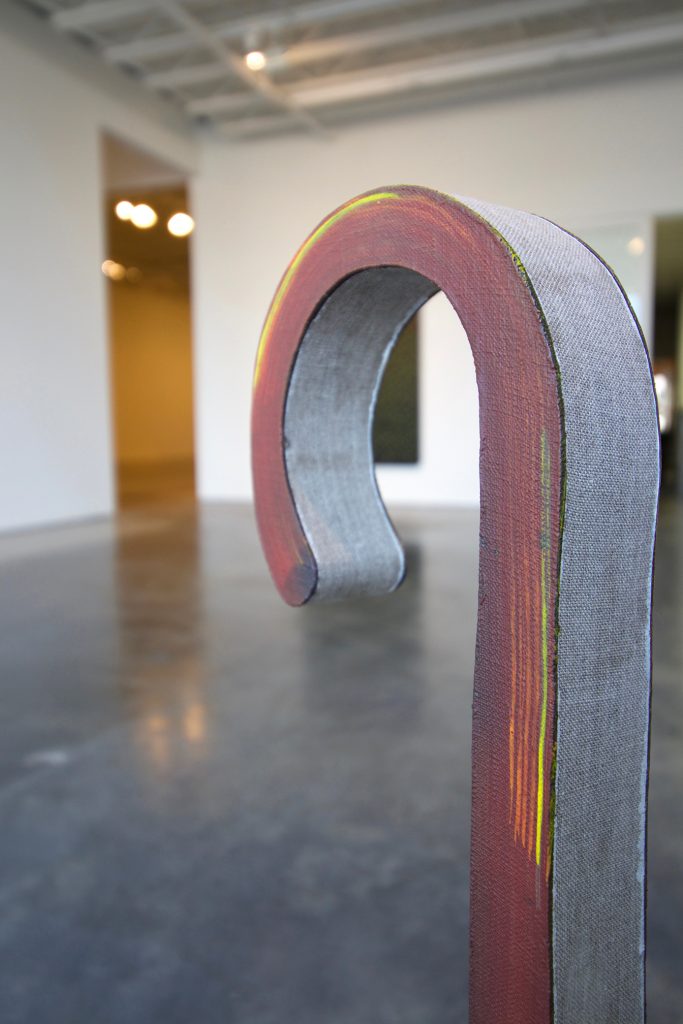 At the entrance to Krueger’s show, summer winter fall spring, we are confronted by a mysterious cane shaped object standing upright by itself, absent of its owner. Upon closer examination we find that the piece titled, “Cane, Cane” is not a real cane but actually a painting of one on linen stretched over a wooden cane shape.

Next we encounter hanging high above us to the left a snow covered looming tree branch projecting out from the wall called, ”Branch, Branch.” Even though a rat is seen scurrying across it, in the bright white box of Haw Contemporary there is no sense of it being ominous but instead elicits wonder and delight. Again, because the branch is actually painted on linen that has been stretched over a laser cut branch-shaped “stretcher” on which each piece of snow has been realistically constructed, painted and placed on the branch, we happily suspend our disbelief and enter Krueger’s world.

This introduction to the show immediately sets the stage for us to question the meaning of what qualifies a thing as a painting and what really is at work in the semiology of Krueger’s meaning-making art. Sure the cane’s absence of functionality reduces it to a sign that speaks to how its language works, both indexical of aging and time but really it is more about a kind of playfulness that negates interpretation and is more about storytelling.

Krueger writes that summer winter fall spring has an out of order narrative composed of works that “function as moments in a film, pauses in the action that give resonance to the characters or glimpses of the gravity of what is to come.”

Like in a film the narrative of the show shifts location, points of view, and time – especially through its props. Two “Sky Lanterns” hang high off hooks attached to the wall, again constructed of linen stretched over shapes based on a Colonial Paul Revere tin lantern.A punched design of the 18th century with cuts in the linen through which light can pass and are painted in a gradient from sky blue to white. These can be seen as one enters the show and in conjunction with the cane and tree branch, recall a scene from the 1819 Washington Irving story, “Rip Van Winkle.” However instead of waking up in the future, like the story’s main character, we seem to have walked into the past.

So what time is it? 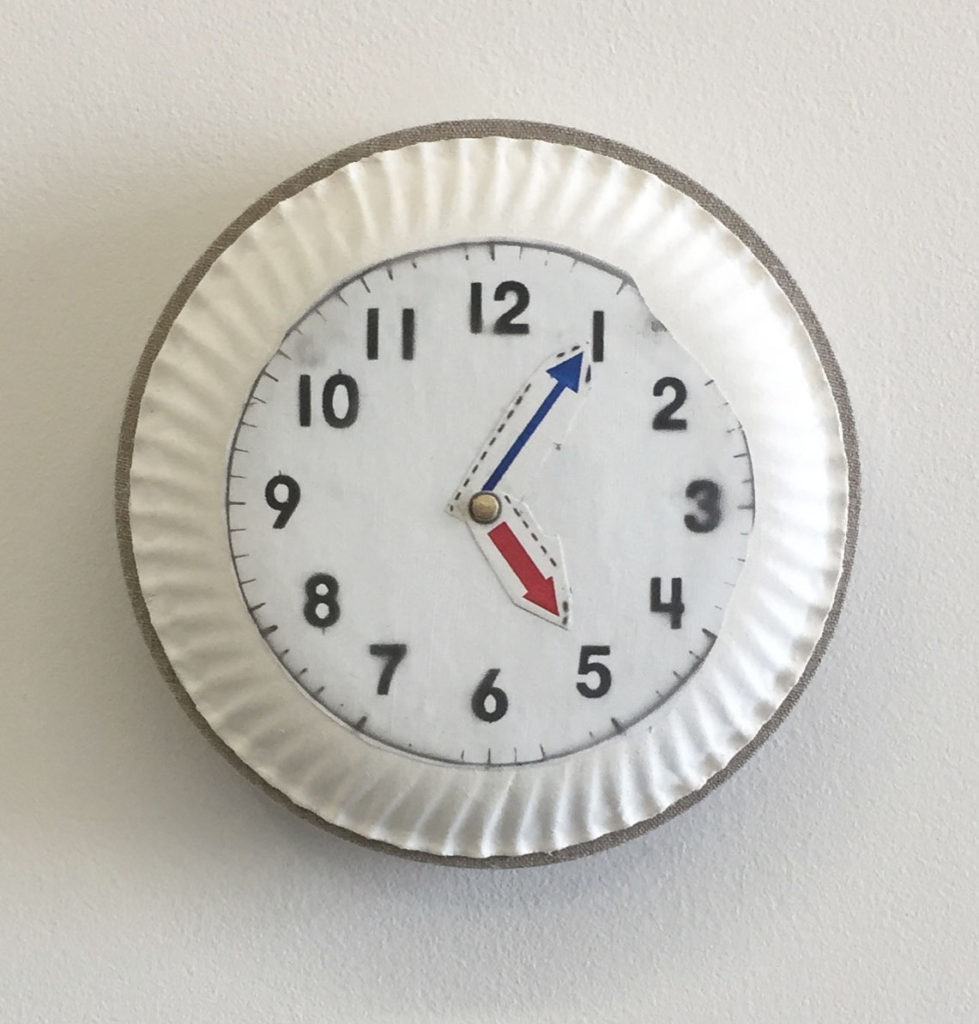 Don’t worry, Krueger has created an eerily accurate three dimensional reproduction of an iconic child’s learning clock titled, “Stray Time,” like we have all made from a paper plate with rotating hour and minute hands fastened to the center by a metal brad. With it we were first taught how moments in our lives are to be measured; that there is a time to wake up, eat and sleep. This seemingly benign object is Krueger’s reminder of how our perceptions of experience cannot really be measured but are actually an accumulated narrative of moments based on memories from which we form our understanding of time. Why in the show’s title, “summer winter fall spring” the seasons are listed out of order is because in our remembrance of the past, spring does not become summer and shouldn’t be thought of as before and after, and that time and being are really the same.

As Krueger writes, “I am not interested in the end of seasons but rather the slow dissolve and how it relates to personal narrative.”
Krueger’s sensibilities resonate with what the 13th century Zen patriarch Eihei Dogen wrote in his essay called, “The Time-being,” that “Time is existence, and existence is time and you must see all things in this world as time.” Or in other words, to really live is to accept that you live “for the time being,” and so should fully enter every moment of time. 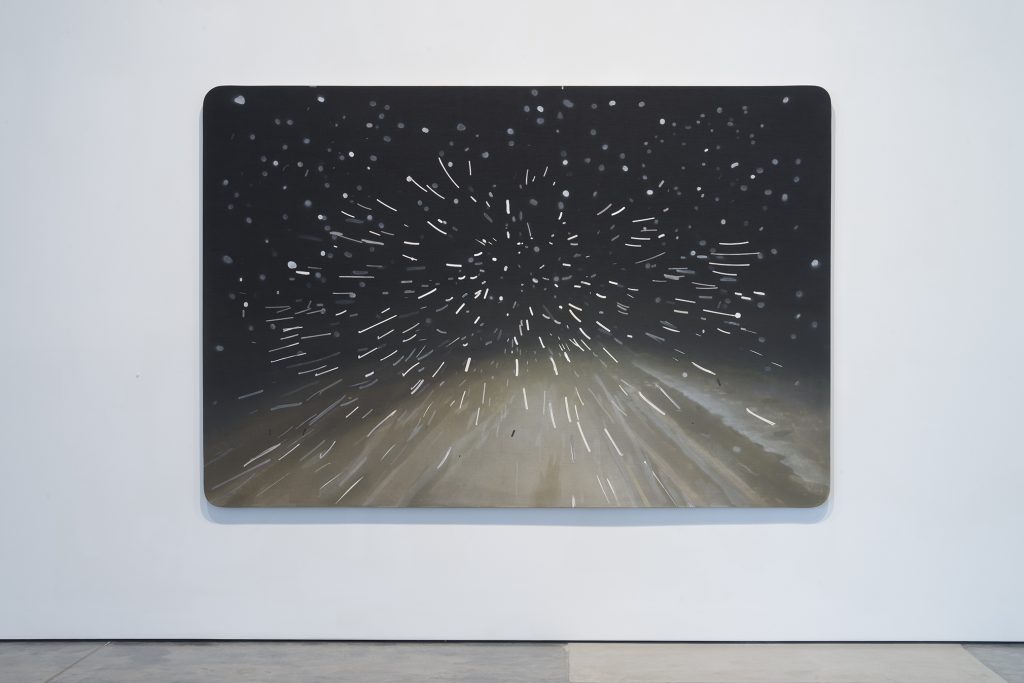 The largest painting in the show titled, “Snow Drive,” evokes just such an experience for many viewers, when perception was heightened and transformed by both fear and delight of driving into the vortex of a snow storm illuminated by headlights. Krueger described it as being “at once a beginning, a middle and an end,” but again, not necessarily in that order. Each dot and dash in the painting has been meticulously created in Illustator® and composited into stencils through which, the printmaker Krueger, has applied layers of paint and medium to create this “brushless” painting. It owes its heritage to both the field painting of the 1950’s and 60’s and to the early 19th century painters, Thomas Moran and Albert Bierdtadt, who Krueger admires more for the narrative of their expeditions than their actual landscape paintings. In “Snow Drive,” Krueger’s own recollection of a journey down a snowy South Dakota highway represents his version of the West, a subject that fills this show with content – including scores of locusts, a walking stick, and a painted feather shaped canvas that stands vertically balanced on its quill.

Like in Krueger’s 2016 “Interior” drawings in which he montages objects from different cultures and times in a dialectical play, here he does it throughout the gallery space. With the piece “Radio, Radio 1,” two slightly enlarged reproductions of the first transistor radio, the 1954 Regency, that sits next to an early 19th century kerosene lamp shaped painting called, “Alice (Lamp).” Placing these sound and light source “things” together, despite their historical disparity, links them and gives us great delight without quite knowing why, but somehow we believe Krueger when he says. “It’s about the truth.”
There is a sense of transcending time and space as we circumambulate summer winter fall spring and venture to places in our own personal experiences of past or present through Krueger’s image journey. 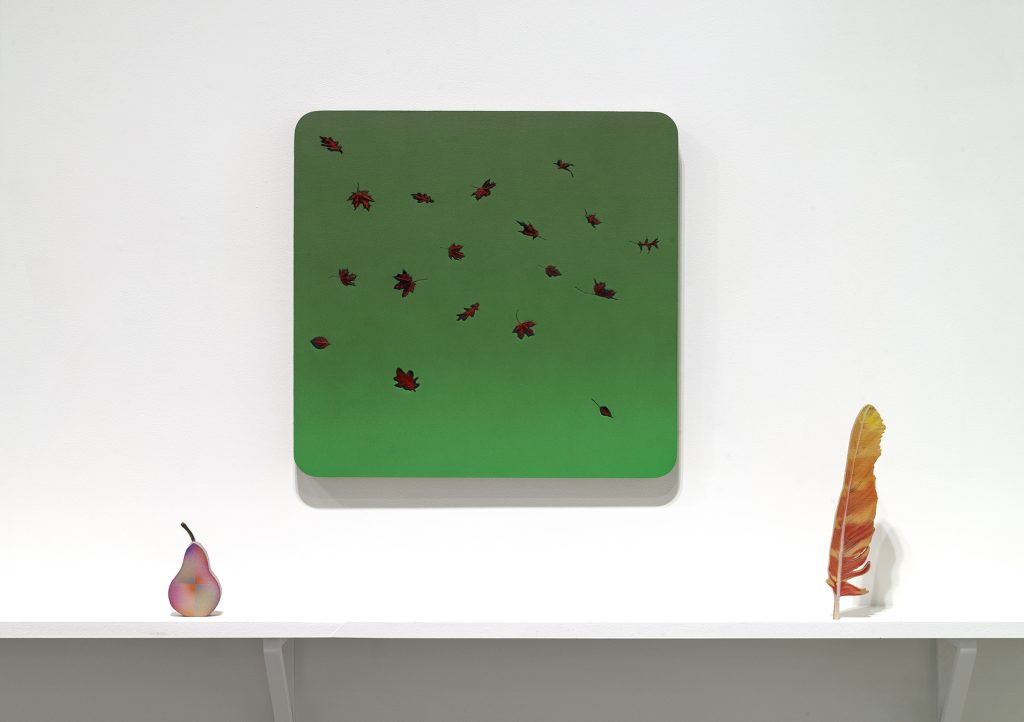 In both “Fall” and “Little Leaves” leaf shapes are suspended in fields of color and are contrasting studies in scale. In “Little Leaves” we are drawn in close to the miniature–like raised details of the red-veined dark leaves as they dance over a background of graduated green, each leaf a unique shape turning in variations of poses. While in the larger painting “Fall” its leaves are saturated with orange, red and yellow against vibrant bands of graduated color from dark blue to turquoise. Both paintings suspend time by stopping and freezing the falling leaves allowing us to be present in these particular moments of the seasons. 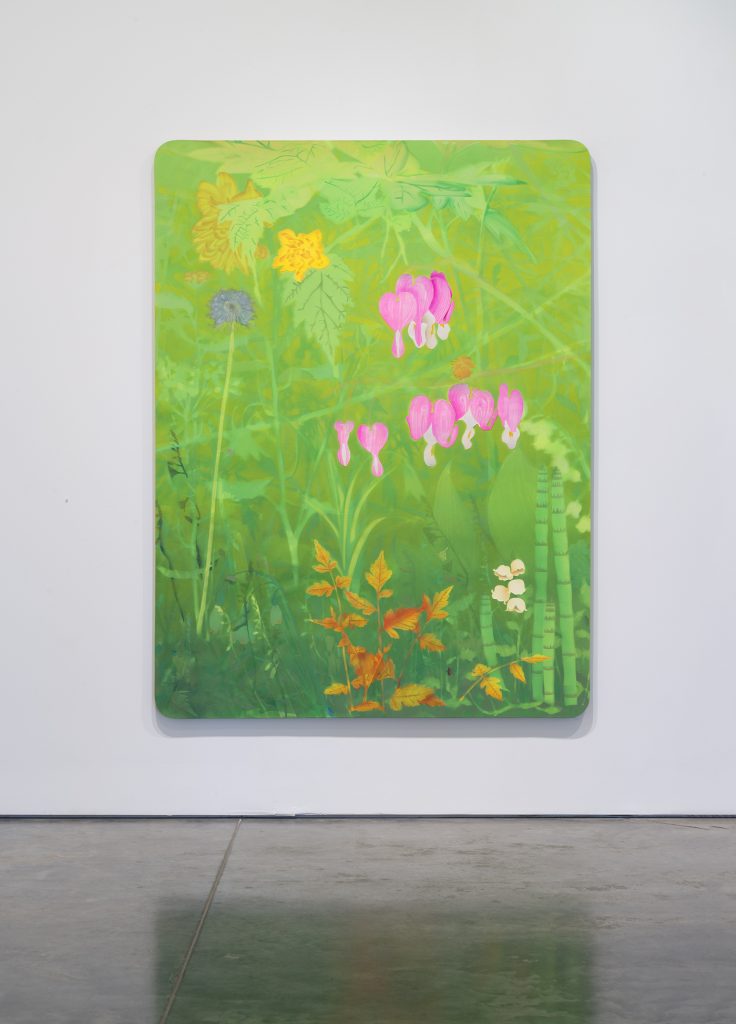 The large painting “Spring” is like a film within itself that combines multiple points of view of plants with shifting scales, volumes and intensities of color, all combined into one space that we accept as “real” despite its layers of transparency and opaqueness which push the pink bleeding heart flowers out both literally with their dimensionality and figuratively with their prominence and lush color.

A portrait of a parrot emerges from the building up of warm grey paint to form the shapes of its layered feathers called, “Winter’s Parrot”; its large round eye watches over the show. In “Summer,” hundreds of detailed neon green locusts swarm and vibrate in ordered patterns across a gradient night sky. Wet lines fall diagonally across a vertical field of light blue in the painting called, “Rain.”

“should not be confused with understanding, or knowing.

If you try and make sense of it all

You will miss the possibilities.” 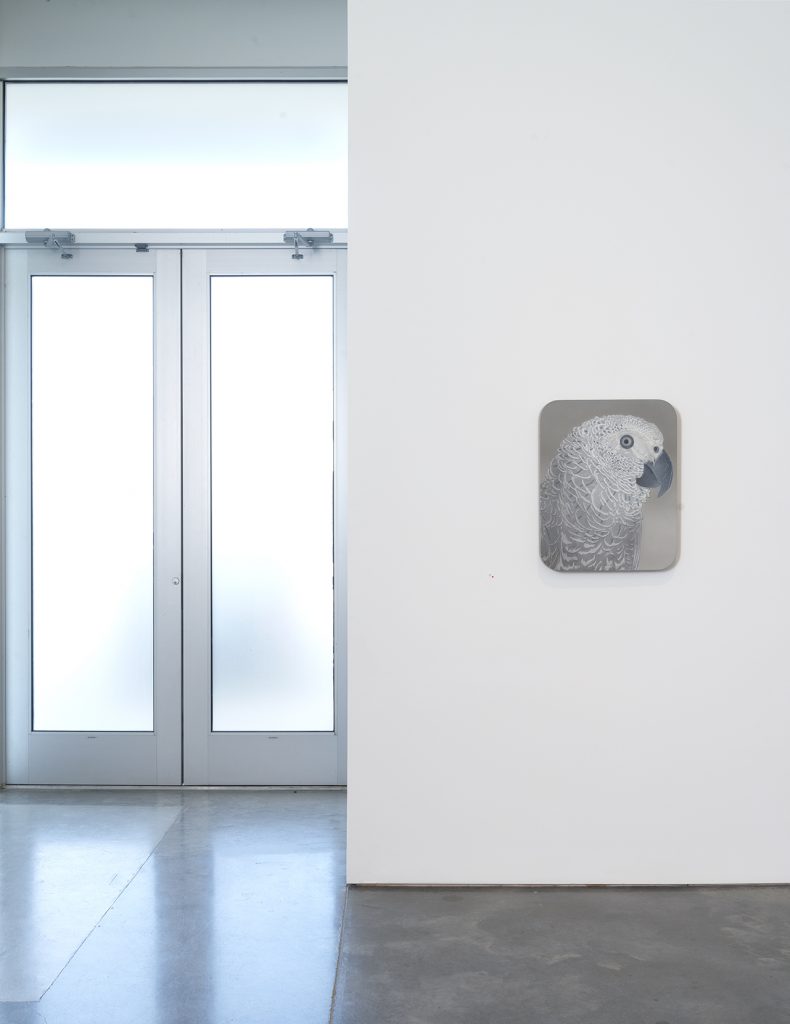