Where is Nuance Found? A Review of Arterial Echoes: Three Generations of Creative Mentoring

Arterial Echoes: Three Generations of Creative Mentoring, at UMKC’s Gallery of Art , which ran from September 8th through October 28th 2016, presented a series of work shown in eight groups of three: one UMKC faculty member, their mentor, and a student (the faculty member taught). With a diverse representation of drawing, painting, print, and digital media, cohesiveness was achieved through presenting these triad relationships.

The carefully crafted title, Arterial Echoes, was meant to showcase parallels in the highly diverse works. That diversity as a whole lessened the specific emphasis on these shared connections.  Our ability to trace the routes these artists followed to conjure their own work stopped short when we only got to see one piece from each artist in a grouping.

For instance, with the work of Ricky Allman, we saw only a single painting from his larger body of work, and only one work plucked from his mentor’s and student’s portfolio. This relationship is narrow.  The problem is that the works chosen were too distilled; they did not seem to be carefully decided and consequently destroy the contextual oeuvre of each artist. They focused more on comparing directly to the professors than to the mentors and students as artists with broad practices themselves. The show would have been stronger if  it focused on more work from one or two triads of artists and allowed conversations to occur within the gallery.  There is simply not enough to compare, and ironically, too much.

Works by Timothy App, Andy McIlvaine, Davin Watne. Images by the author (left) and courtesy of the UMKC Gallery (right)

This show did not showcase all three artists’ works made concurrently, which could have better represented practices in adjacency to each other. The years in which the work were pulled appear random and unconsidered.  Within one triad of works, professor Kati Toivanen’s has work from 2015, mentor Stephen DiRado’s was from 1987, and the student Sarah Kraly’s was from 2009. Contrarily, in another triad, professor Ricky Allman’s work was from 2015, mentor Hyunmee Lee’s from 2015, and student Sopearb Touch’s from 2016. Logically, with narrowed time gaps between more current works, routes are more accessible and cohesive. This particular grouping of  Allman, Lee, and Touch was one of the strongest in the show in terms of how it highlighted the formal kinship between the artists.

With an intent to emphasize a route where the artists gave themselves permission to use the tools their predecessor provided, connections became apparent formally, moving from surface to surface of each piece in the show. The oil paintings of UMKC professor Davin Watne, his mentor Timothy App, and Watne’s student Andrew McIlvaine did strongly represent this route. What becomes evident in this grouping is that we often overlook the impact of our influences. The similarity of the monochromatic color palettes were obvious. After recognition of what else exists within the frame of view, the rest of the linking elements became clear. While content is broad in this group, compositionally, the paintings were very similar through the treatment of the frame. The atmosphere, dull and thick, surrounded the illuminated centers of each work. 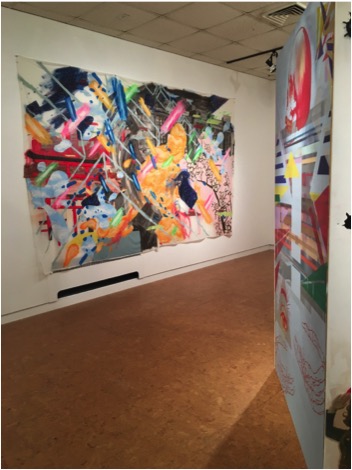 But these were three works out of twenty-one. The other eighteen were not necessarily linkable to these three. If they were — it is a stretch.  There are photo prints, etchings, and video work; all of which don’t necessarily talk to any of the other groupings. This show is full of separate micro conversations, without a focus on the whole. Unlike a museum, that sections off works in expansive rooms by time period  showing a large breadth of a particular movement, this show was doing too much with too little space.  If this had been eight mini shows with more work, and more room it could have been more exciting — and also more specific.  The goal of the exhibition, to exhibit three generations of mentoring, lost its luster when too many connections were trying to be made

This exhibition found success in how these relationships echo one another formally. We expand our ideas through being influenced by those around us. This particular exhibition complicated this intent with its broadness. There were many disparate pieces that made the show like a garment unraveling a broad history. One could find the thread between the work of Stephen DiRado from one triad, of Elija Gowin from another, Andrew McIlvaine from another, and so on.  These possibilities made it apparent that there were an infinite amount of threads to be traced without the support of a solid thesis beyond formal comparisons.