Woman’s Work: A Conversation with Misty Gamble on Decade 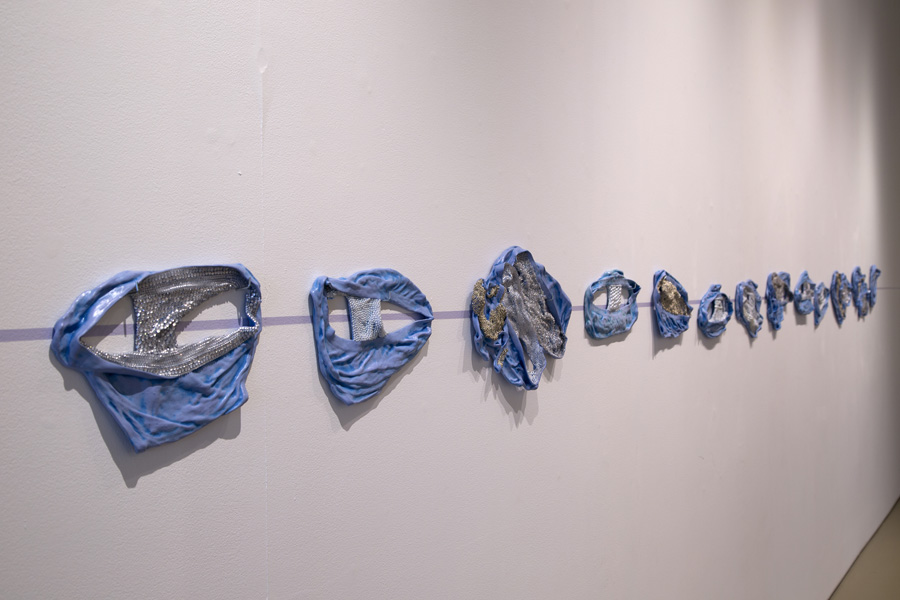 The invitation to peer inside women’s underwear is hard to resist. Strewn across the gallery wall, the ceramic artist Misty Gamble’s confrontational “Blue Sunday” stimulates a reaction of curiosity and repulsion. Shaped like they were just removed and left crumpled on the floor, the ceramic panties expose a strip of fabric rarely glimpsed in a public setting, sparkling and colorful with costume rhinestones pasted to the private interior. The installation suggests a body, and the inner functions of a body, without introducing the figure herself. A simultaneous desire to approach and avoid means “Blue Sunday” successfully interfaces with our own sexual desire, since we are not looking at newly shed intimates, but baked clay in disguise as lingerie. We find ourselves in the physical Uncanny Valley where the subjects of “Decade,” ten years of Misty Gamble’s agitated feminine expressions, become real enough to raise questions. 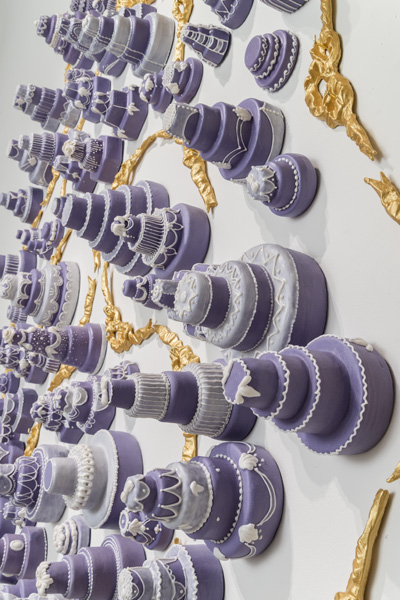 Our meeting at YJ’s offers an interestingly contextual  view of bright white BRIDE text in the window across the street, a falsely angelic glow advertising wifehood like a sought-after brand in the dark evening. It’s an appropriate backdrop for a conversation with an artist who spent her life thinking about desire, traditions, and what it means to be female. Across the small table, Gamble recounts the creation of her huge wall installation, “Forevermore.” “This was finished in 2016, but it took a year and a half and a lot of hands to make. ‘Forevermore’ is only a fraction of what we actually produced in the studio,” she lays her hand on the image of the lilac ceramic wedding cakes between snaking gold ribbons, installed vertically on the Leedy-Voulkos main gallery wall. “I did these in the symbolic colors of bridesmaids: lavender and white. I criticize conventional ideas of what makes people happy, such as being a bride, having glamorous weddings, the notion that more is always better.”

More is better in the case of the installation. Almost every piece in the show employs the use of multiples to overwhelm an idea and drive the viewer to consider what limits we will go to to have excessive wealth and status. At a distance, “Forevermore” becomes an illusion of wallpaper that has sprung up out of the second dimension. The gold material woven between the lilac cakes outlines an unmissable vulvar shape, locking in the inseparable bond between societal decadence and primal desire. Ceramic wedding cakes direct the conversation to a ravenous hunger for social authority, and one of the means of acquiring it.

Excessively adorned hairdos and desserts exude a passion for wealth, status, and sexual parading. Figures are grotesque and out of proportion, but still decked out in facsimiles of the finer things. Gamble’s unflinching criticism is rooted in her formative years. Rather than damn outright the norms of wealthy Palm Beach and Los Angeles trophy wives, Gamble adopts the role of cultural anthropologist to observe the ways consumerism and lifestyle are inextricably linked by status, which changes color and shape in each location. Palm Beach is garish and bright. LA is fashionable and severe. “I used the Kardashians for some of my research to find out what women of a certain status want from the world. But it’s odd to be commenting on it, and to come from it, make work about it, satirize it, and want to sell it,” she considers. “I always knew I would make the work I wanted to make, and nobody was going to stop me, because the only thing I want to be is authentic.” Authenticity itself is under the cultural microscope of Gamble’s studio. The disheveled piles of pastel pumps borrow imagery from every women’s department store in the nation. The artist’s name in a Kate Spade-esque font inscribed on the inner arch denotes factory-processed shoes at an affordable price. As style consumers, we too can wear cheap and reasonable heels out into the world, provided we don’t mind them coming apart after their factory set sturdiness has worn off. Lucky for us, fashion is easy to replace. 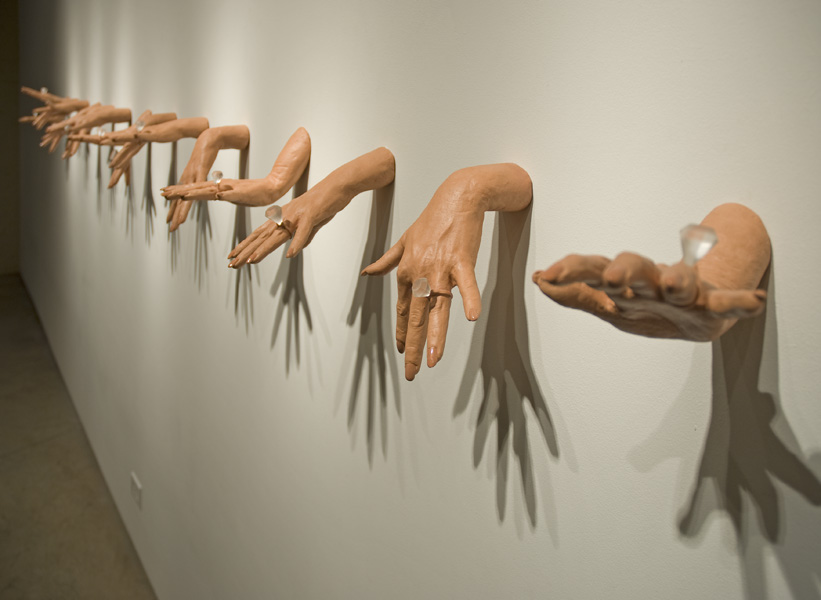 The same fascination with the lifestyle of the rich and vapid amplify “Tan Hands,” a series of nineteen hands sticking out of the wall, showcasing gaudy faux diamond rings, in a manner a woman with such a rock might exhibit to her friends. Prim and dainty, fingers stiff and angled down to give the admirer a better look at the towering stone atop a gold band, “Tan Hands” explores the culture of pride that comes with following convention. But even with a rotation of studio assistants through the years, Gamble cast her own hands for the piece, uncovering another layer of personal history in the procession of wives-to-be. “I’ve been one of them,” she says, flexing her retired piano hands. “I’ve come from these worlds, but I was always the outsider.” As an outside observer, Gamble’s comments could be misconstrued into bitchiness if one neglects to consider the intellectual analysis the artist subjects herself and her topics to. None of us are really outside the reach of pretty things, of being liked by our peers. “Tan Hands,” like other work in the show, examines a type of solution to our cultural insecurities in a personal manner. 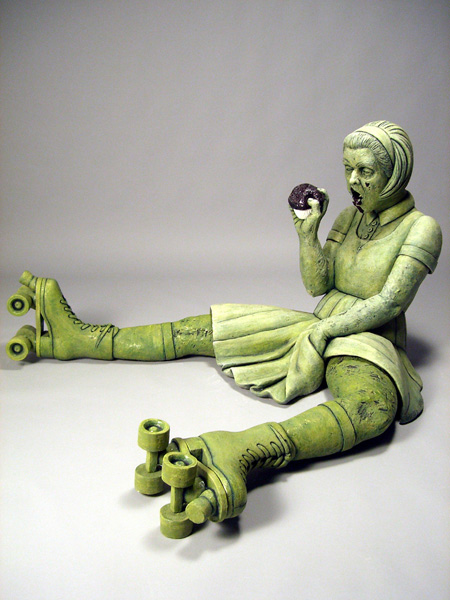 Betsy After School by Misty Gamble. Ceramic. Image courtesy of the artist.

Misty Gamble grew up in Los Angeles, where the lines between culture, class, and kitsch are more blurred than in the Midwest. While she was pursuing her MFA in San Francisco, she earned the reputation as a troublemaker in the male dominated ceramic program. “I did different things to antagonize my professors. I set out to make work that was so beautiful and terrible in its horrendousness, that it couldn’t be avoided. Women are told throughout their lives: be pretty, be smart, get educated. But for god’s sake don’t make any waves.” The figures in “Decade” evoke a visual puppetry without the strings, but the gesture of her subhuman figures recall the unsettling weightlessness that animates a marionette. Metaphorical strings attached to each woman and woman-like caricature are socially imposed by the greedy clamoring of society to have more, to prove more with frivolity. “Sweet Terror” came out of this drive to challenge what society expected of women and women artists. The childlike figures in “Sweet Terror” are at once humorous and terrifying, like demonic waifs escaped from a personified version of daily insecurities. The green teen on roller skates, “Betsy After School,” reacts to her environment by messily eating dessert in the middle of the floor, one hand stuffed underneath the folds of her pleated skirt. All the figures in “Sweet Terror” linger somewhere between real and imagined, on the cusp of becoming human, but denied by their desires and the imposing expectations of the environment they were born into.

Gamble’s ten year retrospective is presented at the perfect time, and every piece in the show is worth seeing. Today, femininity is continuing to be redefined by strength and courage, and the bold figurative work in “Decade” is a reprieve from the enigmatic conceptualism that dominates a male-driven scene. “People are so scared and fearful, and that’s the last thing we should be right now. I’m going to keep making this work because I won’t be bullied,” Gamble says of recent political events and the timeliness of the show. I nod in agreement, recalling the stoic busts “Decadence” and “Luxuriant,” two perfectly styled figures whose hair denies each a chance to speak or listen.